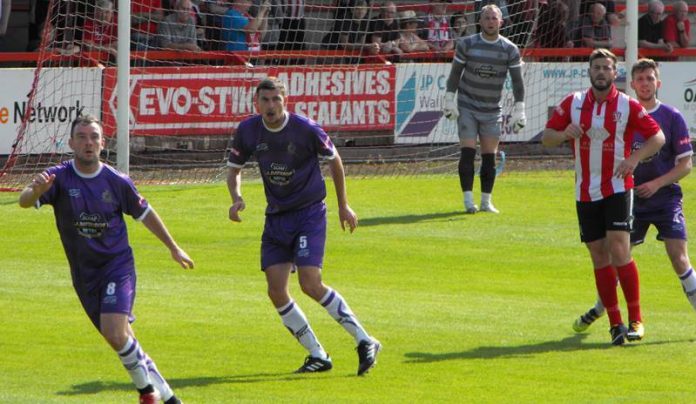 It was a frustrating day for Salford City in the North East.The better side until Liam Hogan’s controversial 37th minute dismissal which saw the Ammies reduced to ten men for the second time this season, Andrew Johnson put Spennymore in front in the 72nd minute before Salford grabbed a point courtesy of a Shane Henry Own goal with eight minutes left.

Sam Minihan had put County ahead after just four minutes before Bradley Reid equalised for the hosts seven minutes later. With 14 minutes Styche, at the edge of the County box, seized on a clearance by Chris Smalley and rifled home, with the aid of a deflection, to put the Lambs in front and sealed the game from the penalty spot as full time approached.

Curzon Ashton crashed four nil away at Alfreton, a result that leaves them after seven games, just a point above the relegation places while FC United leapfrogged ahead of them with their second win in two days with a  2-0 victory at 10 man York City with late goals from substitute Tom Greaves and Jason Gilchrist.

Into the Evo Stik Premier Division and Altrincham’s season continues on the up with a third successive win, for the first time since January 2015, this time at Witton Albion,James Poole and Josh Hancock both scoring in the first half.

Stalybridge meanwhile recorded a fifth straight defeat at Lancaster which has left them firmly rooted to the bottom of the table, a first half Tom Kilfin goal was the difference between the two teams who were two divisions apart last year.

Ashton United’s unbeaten start to the season came to a spectacular end as they entertained Buxton United.The visitors were three up at half time while Ashton saw their goalkeeper stretchered off.

In Division One North, Droylsden are second in the table couretsy of a third successive laegue win, this time over local rivals Mossley,Liam Caddick and Dom Smith scoring in the first forty five minutes.

Trafford are still searching for that elusive first victory after Atherton Collieries held them to a 1-1 draw at the First Point Shawe View Stadium.James Dean putting the hosts ahead in the second half, Ash Woods then blasting a penalty against the bar before the visitors took a share of the points from the spot courtesy of  Ian Howard.

Radcliffe Borough were outplayed by a dominant Ramsbottom, going down 3-0 thanks to goals from Luke Thompson,Sam Heathcote and Ben Richardson.