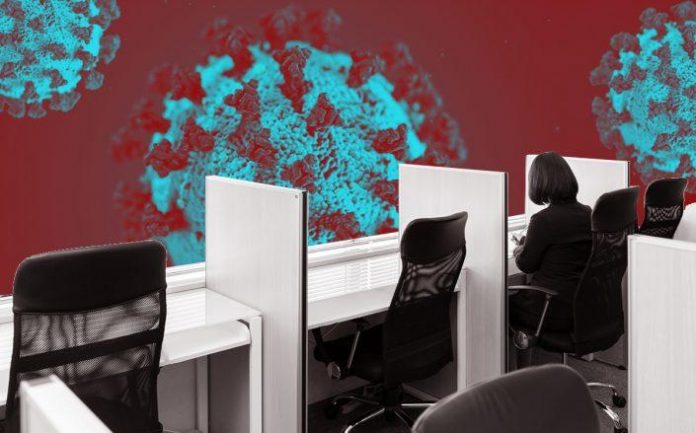 Reduced hot-desking, the closure of office lifts and canteens, and putting tape on the floor to mark where people should stand are among measures being proposed by the Government to get back people back to work.

Draft documents from the Department for Business, Energy and Industrial Strategy, seen by the BBC and the Financial Times, say extra cleaning should be introduced in office spaces and the use of protective equipment should be considered where maintaining a distance of two metres between workers is not possible.

For workers who have customer-facing roles, plastic screens should be erected to help protect them, while continued home working and staggered shifts should also be encouraged, the guidance says. The proposals are among a list of guidelines in seven documents drawn up after consultation with executives, trade bodies and unions.

The move comes as ministers prepare to receive the first data from the Office for National Statistics’ 20,000-strong “infection poll” showing how many people in Britain currently have COVID-19.

Today’s results from the mass swab-testing program should give the first reliable indication of the true prevalence of coronavirus in Britain, while a second data tranche later this week should give a clear estimate of the current rate of infection — the much-discussed “R” figure that will guide thinking on when to ease the lockdown.

Meanwhile The Government is reported to be considering whether to relax the two-metre rule for social distancing in workplaces.

The rules are not based on hard scientific evidence.The World Health Organization says that a distance of one metre is safe, while others suggest 1.5m or 1.8m with the UK opting for two metres.

The UK’s advice comes from pre war science which established that droplets of liquid released by coughs or sneezes will either evaporate quickly in the air or be dragged by gravity down to the ground.The majority of those droplets, they reckoned, would land within one to two metres.

More importantly it is how long you stay in contact with people and whether you are inside or outside.The odds of the infection being passed on were nearly 19 times greater indoors than when outside in the fresh air.

Alan Beswick’s late night conversation with alleged paedophile was a serious breach of...