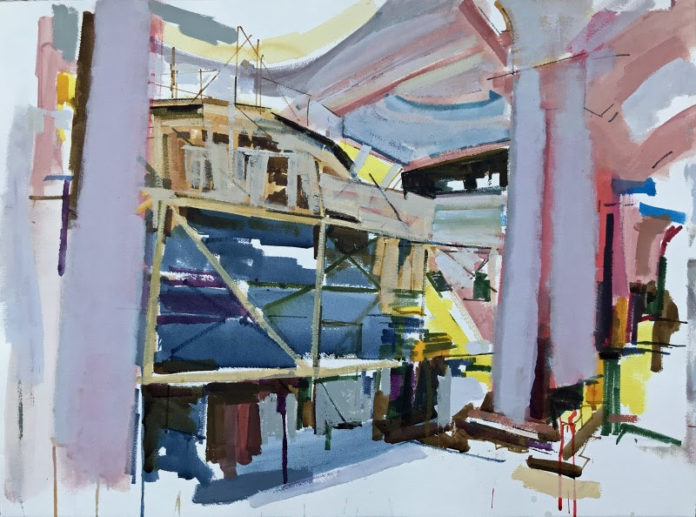 With a long-term commitment to exploring our experience of landscape, Colin Taylor embarked on the year-long project Lighspace: A Year In The Round inspired by the Exchange’s architecture and the stories told both in and outside the theatre module. This has resulted in the creation of almost 40 paintings and drawings based on productions in the Exchange’s 2018 & 2019 seasons . The works will be exhibited simultaneously in both the Royal Exchange Theatre and Contemporary Six from Thursday 26 September.

‘Like many who have experienced the Royal Exchange, it is impossible not to stop to look up and around you. It doesn’t matter if this is your first or your hundred-and-first encounter with the space, this is what you do.

‘For a long time before this project, I had been curious about how the two architectural structures, one inside the other, could be represented in paint. From the outset, this reciprocal spatial relationship was always going to be a strong feature of the project, but it quickly evolved and extended to include some of the imagined landscapes created each month within the theatre itself.

The other unplanned intervention has been a switch in emphasis toward the illuminated space cushioned and surrounded by the Theatre’s two defining physical structures. It’s a beautiful space and it’s been a privilege to spend my time working within it’.

‘Colin is adept at capturing the atmosphere of a place in a striking, contemporary, way. In his works, locations are portrayed with bold marks, surprising colours, and lots of light. The Royal Exchange Theatre is a perfect subject — a classic Manchester landmark with a sparkling core. Having watched our Gallery-artist’s ambitions evolve over the past years, this inaugural two-venue exhibition has all the hallmarks of being a real success: a meeting point between architecture, performing, and visual arts; and a local talent who is able to cast a new light on a familiar, world-renowned venue’.

How to Start a Courier Business in 4 Steps

Born to Move! Our Parks brings free fitness sessions to Manchester as part of...