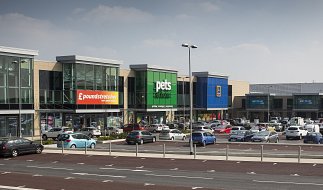 Police are appealing for witnesses after two police officers were attacked by armed robbers in Walkden in the early hours of this morning.

The officers attended a petrol station at Ellesmere Shopping Centre to reports that a robbery was in progress just after 4.00am when the van they were travelling in was rammed repeatedly by the Vauxhall Touareg that the four offenders were attempting to flee the scene in.

One of the men then got out of the car and began smashing the police van with a pick axe before re-joining his accomplices.

The four men then fled the scene in the 4×4, which was later found on fire on Troutbeck Drive close to the junction with Thirlmere Avenue in Astley.

Luckily both officers only sustained minor injuries during the attack.

Further enquiries established that the offenders had managed to smash their way into the petrol station by ramming their car against the door before going inside and stealing a quantity of cash and cigarettes.

Detective Sergeant Amanda Weems of GMP’s Salford borough said: “This was a shocking incident which has left two police officers injured as a result of a senseless attack by a group of violent offenders.

“We are carrying out a number of lines of enquiry this morning however I would like to seek the public’s help to track down those responsible.

“The offenders have managed to gain entry into the petrol station after ramming a side door with their car before going in and stealing a quantity of cash and cigarettes.

“Although this happened in the early hours of the morning, it is possible that people may have seen or heard something given the disturbance that would have been caused by the robbery and subsequent attack on the officers.

“If you have any information then I would urge you to please contact police.”