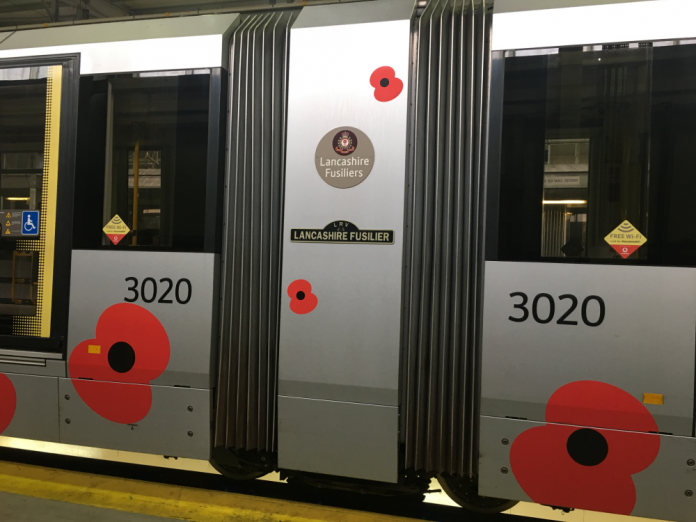 Members of the Armed Forces will be able to travel for free on Metrolink out-of-uniform after Transport for Greater Manchester (TfGM) reaffirmed its Armed Forces Covenant.

Regular or reserve members will be able to travel for free after 9.30am Monday to Friday, or all day on weekends and Armistice Day, Remembrance Sunday and Armed Forces Day, as long as they carry their military identification card.

This agreement improves the current offer that enabled members of the Armed Forces to travel for free as long as they were wearing their uniform.

The Armed Forces Covenant also pledges a range of other measures to support the Armed Forces, including: working with the British Legion, supporting TfGM staff who choose to serve as members of the reserves, and supporting service members’ spouses and partners who are employed at TfGM

As part of TfGM’s long and proud journey with the Lancashire Fusiliers, poppy wreaths have been placed in both cabs of Metrolink tram 3020 – the Lancashire Fusilier tram.
To mark the 100th anniversary of the end of the First World War – and to honour and remember all those who have made the ultimate sacrifice – poppies will also adorn the tram.

Dr Jon Lamonte, TfGM’s Chief Executive, a former Air Vice-Marshal in the Royal Air Force, said: “We are always proud at TfGM to support our Armed Forces. This is especially true this year, which marks 100 years since the end of the First World War.

“This covenant and the poppies that will adorn our Fusiliers tram are our small way of recognising their work. Now that our Armed Forces will be able to travel for free of out-of-uniform I hope many more of them will be able to take advantage of this offer.

“Alongside this, the covenant pledges a range of other measures to show we are an Armed Forces-friendly organisation and I hope many other transport operators across our city-region follow our example.”

Mayor of Greater Manchester Andy Burnham said: “The reaffirmation of TfGM’s Armed Forces Covenant demonstrates their commitment to serving personnel, veterans and their families, and the value we place in their contribution to society.

“Greater Manchester is determined to do the right thing by serving and ex-serving members of the Armed Forces Community, and it’s great that TfGM have improved their offer of free travel. Making travel easier for the Armed Forces Community, especially as we reach the 100th Anniversary of the end of the First World War, is extremely important and they deserve our support in every possible way.”

In line with previous years, Metrolink will pause services and join the nation in a national two minute silence from 11am on Sunday 11th November