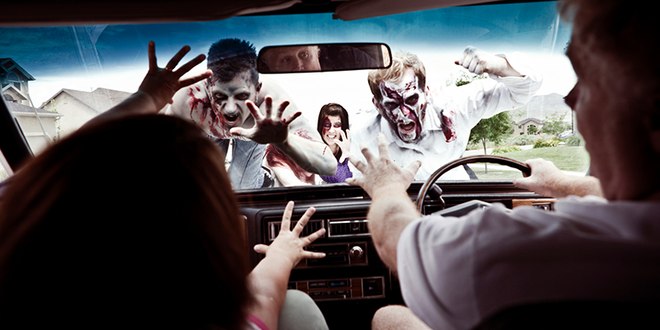 Only 11% of Brits have put thought towards what they would do should the dead rise to eat the living according to a survey from You Gov.

For those of you unfamiliar with the term, a “zombie plan” is a plan for what to do in the case of a zombie outbreak. Given that zombies do not exist (yet) such plans, of course,are currently purely theoretical.

Nevertheless, the new YouGov survey discovers that 11% of Brits have a zombie plan.

Younger people are much more likely to have one than older Brits: approaching a quarter (23%) of 18-24 year olds know what they would do in the event of the dead developing a taste for human flesh, compared to just 3% of those aged 55 and over. Men are also more likely to have zombie plans than women (14% vs 8%).

YouGov also asked those preparing for an awakening of the dead to detail, in their own words, what they would do. The large majority were kind enough to do so, although 9% selfishly/wisely refused to share their plans in order to preserve their advantage over the unprepared.

The single most common plan (45%) is finding somewhere to hole up and hide, with planners’ own homes or those of their family being the most likely location.

Hiding at home featured in 40% of plans that involved holing up (or 18% of all zombie plans overall).

The second most common feature of zombie plans involves supplies (i.e. food, water, medical kits etc), at 43%. This means that more than half of people’s zombie plans don’t account for how they would keep themselves stocked with essentials after an outbreak.

Even among those who do take this into account many clearly intend to wing it, with more than half of zombie plans that include supplies (60%, or 26% of all zombie plans) involving gathering them after the outbreak starts.

Similarly, many zombie planners seem unprepared to kill zombies after the downfall of civilisation.

While approaching a quarter (23%) of plans involve weapons in some way, just 13% of all plans explicitly acknowledge the possibility of having to kill the walking dead (or, indeed, other survivors).

Of course, if the government had a plan for dealing with a zombie outbreak it might not be necessary for Brits to put their own plans into action.

A previous YouGov survey found that 6% of Brits think the government should be developing realistic contingency plans for a zombie outbreak.

They are unlikely to get their wish, however, as authorities in the UK seem to be passing the buck on who would be responsible for leading the response to a zombie outbreak. Americans, on the other hand, can rest assured that their own government would have the matter in hand, with both the Pentagon and FEMA having already drawn up zombie outbreak contingency plans.