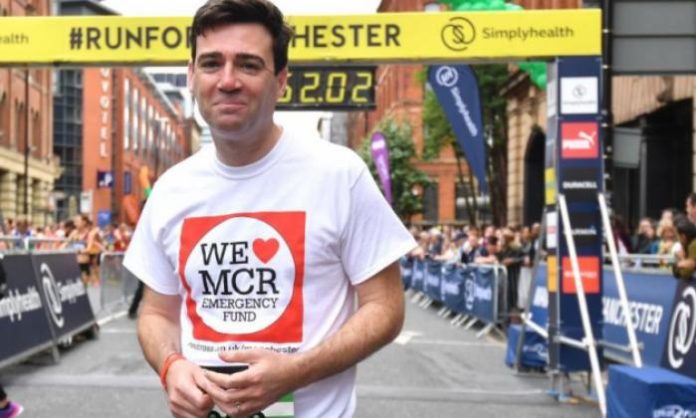 Andy Burnham, is set to pound the pavements of Boston on 15 April, running the marathon to raise funds for charities set up by some of the families who lost loved-ones in the 2017 Manchester Arena attack.

Boston is the oldest annual marathon in the world and takes place each year on the third Monday of April, Patriots’ Day in the United States. It was the target of a terrorist attack in 2013 when three spectators were killed and an estimated 264 were injured.

The Mayor has been invited to run by One World Strong Foundation, an organisation founded by survivors of the Boston bombings who bring together victims of terrorism around the world. They came to Manchester on the one-year anniversary of the Manchester attack.

Andy will dedicate his second-ever marathon to all the families who lost loved ones and will raise money for a number of charities and causes set up or nominated by them.

Andy said: “I know this is a very difficult time for all the families as we approach the second anniversary and, in a small way, I just wanted to let them know we continue to think about them. Greater Manchester will always be there for them.

“Many of the families affected have set up charities in memory of their loved ones and are doing amazing work in their communities to bring people together and give them hope. It is a great honour for me to run this prestigious Marathon for them and I will be doing my best to raise funds for their important work.

“I would also like to thank the One World Strong Foundation for coming to Manchester to support people here and for extending this invitation to me. They are an inspirational organisation working across the world to unite victims of terrorism and build a network of cities standing up against hate of all kinds.

“I’ve done one marathon before and can say without hesitation that this will definitely be my last. If I have a target, it is to beat my last time of 4 hours 28 minutes. But, really, I just want to finish and show how Manchester stands with Boston, Christchurch, Pittsburgh and all the cities around the world who have suffered from appalling acts of hate in recent years. The only way to beat this evil is to come together around the world in celebration of our equality, diversity and common humanity.”

The charities the Mayor will raise funds for are: