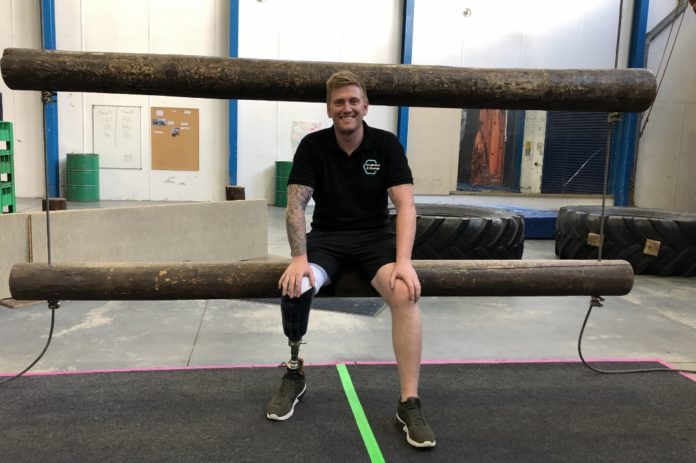 A former Royal Marines Commando who lost his right leg following an explosion in Afghanistan then became a professional golfer has given up that career and joined a Greater Manchester charity as a full-time instructor.

Aaron Moon, 32, who lives in Westhoughton, near Bolton, has taken on the role at Challenge 4 Change in Trafford Park.

The charity’s indoor activity centre features aerial and ground-level courses, a climbing wall and a mock jail which gives youngsters a realistic taste of life behind bars to deter them from making the wrong choices.

Challenge 4 Change opened its doors in 2009, the same year that Aaron sustained devastating injuries during his deployment in Afghanistan.

He was driving an armoured tank when it ran over an improvised explosive device.
Aaron was blown from the vehicle and suffered a broken right heel bone, broken lower right leg, left femur and hip, dislocated knees, a broken back and left collar bone, ruptured spleen and dislocated pelvis.

He was flown back to the UK within 24 hours and underwent a series of life-saving operations, but a year later had to have his right leg amputated below the knee.
Aaron, who joined the Royal Marines in 2006 at the age of 18, was medically discharged from the service in 2011 at the age of 24.

But he vowed not to let his disability hold him back. He built up his fitness and trained to become a personal trainer, setting up his own gymnasium to help others with disabilities.
During this period he met Chris Whiteley, a former prison officer and Salford Rugby League player, who founded Challenge 4 Change and invited Aaron to work there as an instructor on a freelance basis from 2013.

Aaron took up golf in his spare time, got his handicap down to scratch and became a professional in 2015, the first PGA-registered amputee.

He said: “I hung up my clubs earlier this year as I felt I had done all I could within the sport to inspire others.I was lucky to be invited back to Challenge 4 Change to work on a freelance basis again and it seemed perfect timing, being 10 years since the explosion and the charity’s 10th anniversary.When the opportunity arose to become full-time, I couldn’t resist.”

“Challenge 4 Change helps everyone from under-privileged kids to people with disabilities or those going down a bad path in life, and helps to show them they can achieve anything when they set their minds to it.I want to use my story to inspire others to show them what they can overcome, and make a positive difference to their lives.I can’t change what’s happened to me, but I can put my experiences to good use here.”

Aaron, a married father-of-one, added: “After the explosion, I was lucky to be alive, but my body was in bits. A year down the line and countless operations later, my doctors told me it was in my best interests to lose my right leg below the knee if I wanted any quality of life.

“My future was uncertain to say the least. The Royal Marines had been my life, but I still possessed the Commando ethos and spirit, and I wasn’t going to let my situation stop me.
“That’s still my mantra, and I’m thrilled to be able to share it with others and hopefully inspire them through my role at Challenge 4 Change.”

As a teenager, Aaron played rugby league for Leigh Centurions’ academy side, then later for the Royal Marines and the Royal Navy.

He recently took up the sport again as captain of the Wigan Warriors Physical Disability RL team, but tore an anterior cruciate ligament just a few minutes into his debut last year.
Aside from his work at Challenge 4 Change and rugby, Aaron is also a motivational speaker and regularly gives talks at businesses, schools and colleges.

Chris Whiteley said: “Aaron is an very inspirational character and totally fits in with the work we are undertaking at Challenge 4 Change.