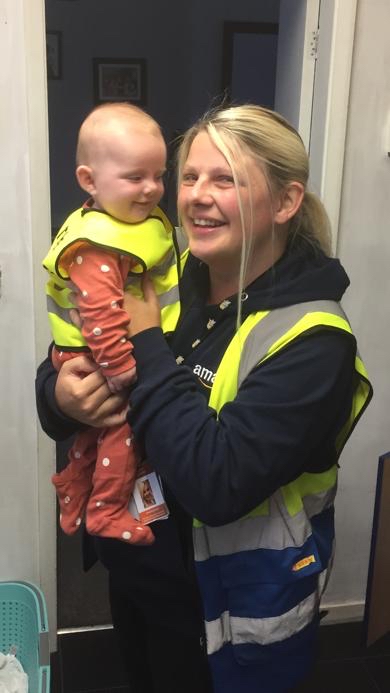 Five charities across Greater Manchester have received £5,000 in donations from Amazon’s fulfilment centre in the city to mark the site’s fifth anniversary.

The Amazon team donated £1,000 each to When you Wish Upon a Star, Petrus, Saint Mary’s Hospital Neonatal Ward, Tree of Life Centre, and Wythenshawe Foodbank.

When you Wish Upon a Star is a children’s charity that grants the wishes of children living with a life-threatening illness and will put the donation towards a wish. Petrus provides residential and day support services to people who are homeless or in housing need.

Wythenshawe Foodbank provides three days of nutritionally balanced emergency food and support to local people who are in crisis and will put the donation towards food items for the foodbank. Tree of Life Centre is a community hub in South Manchester, and the donation to Saint Mary’s Hospital will be used in the neonatal unit at Wythenshawe hospital.

Speaking on the donations, Darragh Kelly, General Manager at Amazon’s Manchester fulfilment centre, said: “We’re really happy to celebrate five years of Amazon in Manchester and the team is pleased to support these brilliant organisations to mark the occasion. All five charities provide essential services across Greater Manchester, and we are thankful to all of their staff and volunteers for their dedication to our community.”

“We would like to extend a big thanks to the Amazon team in Manchester for this donation. We have a particularly high demand for food parcels in the lead up to Christmas, so we appreciate the support.”

The donations were nominated by employees at the Manchester fulfilment centre. Cheryl Henderson, who has worked at Amazon in Manchester since it opened, nominated the neonatal ward in Saint Mary’s Hospital for support. Saint Mary’s Hospital holds a special place in Cheryl’s heart as Harlie, her 18-month year old daughter, was cared for by the hospital when she suffered two collapsed lungs within days of being born.

Speaking about her daughter and the donation, Cheryl said:

“The second Harlie arrived at St Mary’s, the level of care she received was out of this world. I can’t thank the staff enough for helping my daughter get back to full health. She is a happy, cheeky 18-month-old who keeps us on our toes. I am so grateful to work for such an amazing company like Amazon that has donated this money to a place that I will forever hold dear to my heart.”

The charities received the donations as part of Amazon’s programme to support the communities around its operating locations across the UK.

Amazon is providing disadvantaged students with online STEM courses as well as teaming up with charity partner Magic Breakfast and delivering more than five million healthy breakfasts to families in England.

Proud to be ‘Made in Manchester