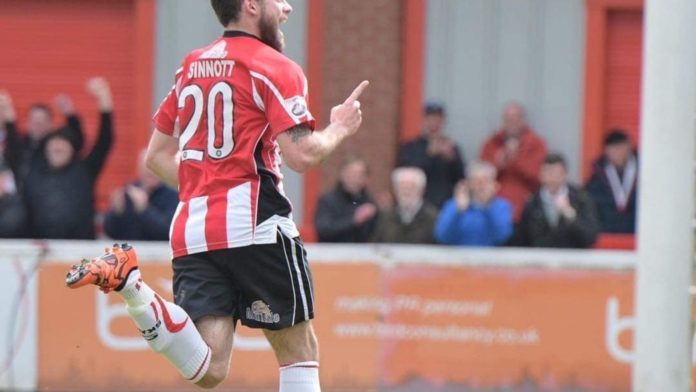 Altrincham have paid tribute to a former player who has died after being attacked during a night out.

Jordan Sinnott, at Matlock Town, was found unconscious in Retford, Nottinghamshire, He sustained a fractured skull and died in hospital. A man has been arrested.

In a statement on their website, the club said that Everyone at Altrincham Football Club is shocked & very saddened to learn of the passing of Jordan Sinnott.

“ Jordan’s father, Lee, who was Altrincham manager for almost 5 years between 2011-2016, has been in contact with Altrincham Chairman, Grahame Rowley, to confirm this dreadful news & everyone connected with Altrincham Football Club sends their condolences to Lee & the Sinnott family,

Jordan joined Altrincham on loan from Huddersfield Town in December 2011 & had a further loan spell at Bury before being released by the Yorkshire club, for whom he made 2 first team starts & 3 substitute appearances.

He then rejoined the Robins in February 2015 & was with the club until the end of the 2015/16 season, making a career total of 62 starts & 7 substitute appearances, scoring 4 goals.

Jordan joined FC Halifax Town for the 2016/17 season, helping the Shaymen to promotion to the National League with a dramatic 2-1 extra-time victory over Chorley.

His impressive performances during that promotion campaign earned him a move back into the Football League with Chesterfield, however he wasn’t able to fully establish himself with the Spireites, making just 8 appearances & scoring 1 goal & joined Alfreton Town on his release at the end of the 2017/18 season, teaming up once again with his manager at Halifax, Billy Heath.

Jordan has been on loan at Matlock Town this season & less than 2 weeks ago scored a hat-trick in an Integro League Cup 2nd Round tie at Basford United that the Gladiators won 5-0.”