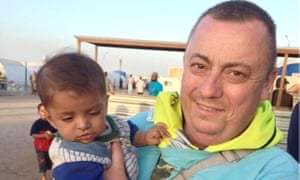 Former taxi driver Alan Henning, who was tragically killed by so-called Islamic State, is to have a road named after him in his home city

City Mayor Paul Dennett made the announcement today after receiving a 2000 signature petition from local residents calling for further acknowledgement of the Eccles taxi driver. All 60 councillors on Salford City Council have backed the idea of paying another tribute to Alan in this way.

It is five years since Alan from Eccles, Salford, was captured and tragically killed in Syria where he had gone as a volunteer to deliver humanitarian aid.

Kas Jameel, who travelled to Syria with Alan, presented the petition and spoke at the full council meeting of Salford City Council in support of the idea.

City Mayor Paul Dennett said: “After Alan’s heart-breaking death we worked with his family on a lasting tribute to him and they chose a memorial garden at Eccles recreation ground where many people gathered to light candles for Alan after news of his death broke.

“Now the public are asking for a road to be named after Alan and, with the support of his family and the full backing of the council, we are more than happy to do that. Alan was a humble man who put aside his own fears to help people of all faiths in their time of desperate need.

“Naming a road after him will be a further tribute to this brave son of Salford who sadly lost his life doing acts of kindness for others. His story touched all our hearts.”

Work is already underway to choose an appropriate principal road on a new development in Eccles, Alan’s home town.

Councillor Shamina August, who gained all party support for the idea, said: “Alan was a remarkable man, a devoted father and an inspiration to all Salfordians.

“It was a pleasure to help get this idea off the ground and gain the support of all councillors, MPs and the City Mayor. A special thanks must go to those who started the petition and all the signatories.

“I am pleased this tribute will soon be taking place on a road in Eccles, so we can all remember the man that Alan was, just as the Henning family do.”

Mayor Dennett said the Alan Henning memorial garden, opened in May 2016, was a place where Alan’s family and the community could reflect quietly on his life and kind deeds.

The garden was based on a clock face to symbolise time and planted with yellow flowers to reflect the overwhelming love, support and remembrance to Alan and his family that came from Eccles and Salford.

Communities from across the city came together and launched individual Alan Henning memorial funds while the former City Mayor Ian Stewart launched a council-led memorial fund to provide support for Alan’s children.

“The garden will remain a special place to remember Alan but the new road will be a daily reminder of how he embodied the Spirit of Salford,” said Mayor Paul Dennett.

Alan Beswick’s late night conversation with alleged paedophile was a serious breach of...