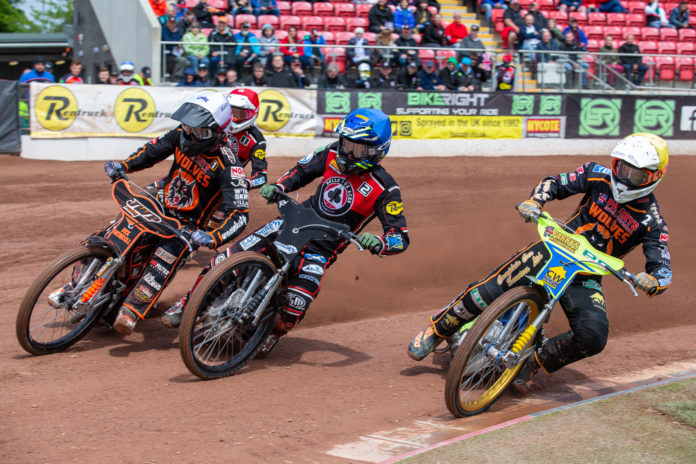 The Belle Vue ‘Rentruck’ Aces are now top of the Premiership after two massive results against Wolverhampton on Bank Holiday Monday catapulted them into the number one spot.

The day began with an emphatic 56-34 win over the Parrys International Wolves on home turn at the National Speedway Stadium where they dominated their Black Country rivals from the word go.

A 3-3 in Heat 1 was quickly followed up by a significant 5-1 from Jaimon Lidsey and Dimitri Bergé in the subsequent race, and from there the Rentruck Aces’ momentum just kept on building.

Rory Schlein’s tactical substitute ride in Heat 12 failed to have the desired effect, and with three heats to go the men from Manchester held an unrecoverable 22-point lead over their rivals.

Max Fricke enjoyed a perfect afternoon’s racing, recording a paid 15-point maximum for his side while Dan Bewley followed up with 10 points and Kenneth Bjerre added a solid 9 points.

Fricke said: “It’s been a good afternoon. All the boys have been working hard so it’s great to see a positive result for our efforts and I’m delighted to have scored a maximum, so it’s been a great day.

“We just need to keep that momentum going. The racing was pretty tight, but it was fair racing, so fair play to Wolverhampton. I think all the riders enjoyed it, even despite the result for Wolves.

“Seeing everyone step things up to produce results like that is very satisfying. We seem to have some good set-ups now so hopefully with more hard work and perseverance we can keep it up.”

In the second of their Bank Holiday bouts, the Rentruck Aces were equally dominant and kicked things off in fine style with a 5-1 from Max Fricke and Ricky Wells to set the pace for the night.

And the momentum of the afternoon only continued to grow as they established a 12-point lead after just five heats, despite inclement weather adding a further challenge to the meeting.

The Wolves were once again forced into tactical substitute territory just two races later, but again it failed to have the desired impact and the Rentruck Aces continued to run away with the result.

A delighted Mark Lemon said: “It’s feels great to be top of the Premiership, and the boys couldn’t be happier with their performance today. They’ve each done their job and produced the goods.

“Conditions were very challenging. The heavens were threatening early doors and the rain did start coming down, which wasn’t ideal, but it didn’t faze us, and the guys stuck to the task at hand.

“It feels like everyone is getting into the groove of the season now. They’re producing the results we know they’re capable of but we’re not going to get carried away with these two results.

“We were impressive today, but the key is to maintain that momentum and keep up this form. We’ve got a challenging month ahead of us in June and, hopefully, more results like this to come.”

Battle of Britain’s best as the top 16 riders descend on Manchester tonight.