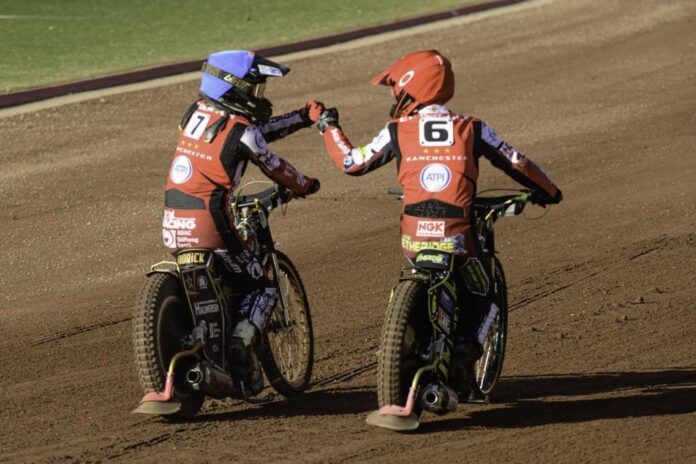 BELLE Vue made good on their promise to deliver revenge over Premiership League rivals Sheffield after mauling the Tigers 58-32 at the National Speedway Stadium.

In a surprising, below-par display for the league leaders, they were unable to launch any sort of challenge to reel in the ATPI Aces who were dominant right from the get-go.

And momentum was very much on the side of the home heroes before Sheffield’s uncharacteristic form became apparent with all the boys riding exceptionally well.

The damage was hefty for the TruPlant Tigers as early as Heat 3 after the ATPI Aces surged ahead and put a comfortable 10-point cushion between themselves and the opposition.

The gap only continued to get wider and wider as the night went on and neither Tigers team manger Simon nor his boys had any answers to the challenge put forward to them.

Few weak links seemed to exist for Belle Vue at home, with this latest victory maintaining their unblemished league record in Manchester.

The drop to reserve for Jye Etheridge paid dividends for the ATPI Aces while rising star Tom Brennan impressed in his first meeting amongst the club’s top five riders.

Brennan said: “Having the chance to move up to No.2 is a big opportunity for me and I feel it’s another step up the ladder, steps in the right direction to be honest.

“From a team point of view, this was a significant result for us. The score makes it look as though we won quite comfortably but the reality was that we had to work very hard for this.

“Sheffield aren’t in the top four for nothing, they are a very strong team but I don’t think it was because they had an off-night that the result turned out as it did.

“I think we surprised quite a few people, but I think we’ve just proved exactly what we’re capable of and how strong we are as a unit and this momentum we need to continue.”

Belle Vue continue their Premiership campaign at home next Monday, July 11 with a visit from the King’s Lynn Stars to the National Speedway Stadium; tape sup at 7:30pm.