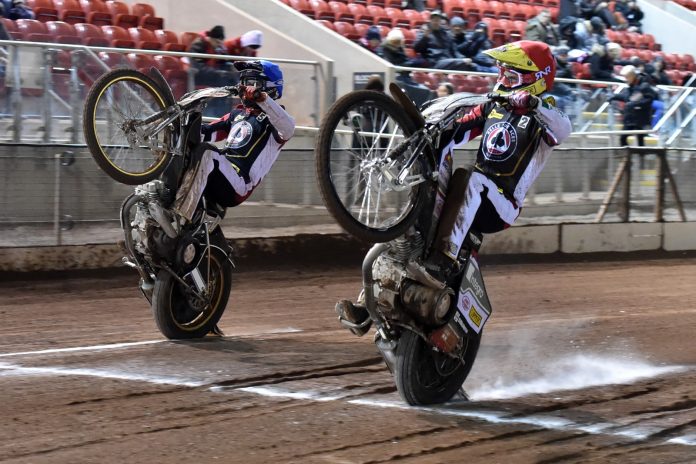 It couldn’t have been a more perfect start to Belle Vue’s 2018 campaign when, on a chilly March 19 evening at the National Speedway Stadium, they triumphed 48-42 over the Swindon Robins.

The red-hot action banished the frigid night air as the Rentruck Aces took control of the first leg of the Premiership Charity Shield, with Max Fricke and Steve Worrall starring for the home side.

Fricke was particularly impressive in his performance when, having been excluded in Heat 4 and going off a 15-metre handicap, he surged to the front to take an emphatic race win.

It was a tough ask of the CFS Filtration Robins to respond to such a powerful offensive, but that certainly didn’t stop them from trying and they did well to keep Belle Vue honest on the night.

It means the Rentruck Aces take a handy 6-point aggregate lead into the second leg this Thursday at the Abbey Stadium, where they have enjoyed a great deal of success in the past.

On his ride of the night, Max Fricke said: “When I was first told I was excluded, I was a bit frustrated but by the time the decision was made to put me off 15 metres, I had to laugh.

“It’s a new rule this year about not being allowed to get off the bike at the tapes and old habits die hard, but I suppose in some ways it fired me up to get the win and I was delighted with the result.

“The whole team really pulled together. There were a couple of teething troubles but I think it shows the potential of this team with just how convincingly we followed through with our aims.

“Having that 6-point lead going into Thursday is very handy. Swindon are no slouches, they’re not the league champions for nothing so we’re taking nothing for granted in the second half of this.

“But we’ve seen plenty of promise from this one fixture. Jye was looking great and Damian will develop over time so all in all I see no reason why we can’t have a good one at the Abbey.”