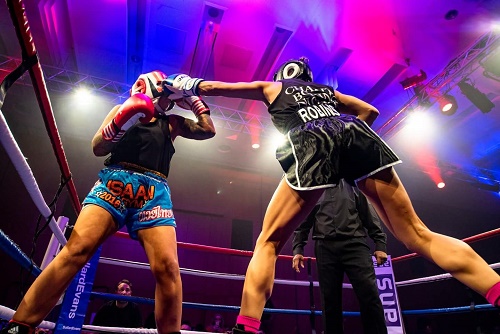 A Salford University academic helped raise £51,000 for a children’s care unit when she swapped the lecturer theatre for the boxing ring.

Dr Anna Robins, Senior Lecturer in Exercise, Nutrition and Health at the University volunteered to undertake a gruelling training programme before taking part in the Charity Boxing Nights event at Manchester’s Hilton Hotel – part of a series run by her former student Ric Moylan.

Ric, who graduated from the University’s strength and conditioning MSc this summer, has been organising the events since 2015 to raise money for St Mary’s Hospital’s Newborn Intensive Care Unit.

He set the events up in memory of his niece Soffia Rose, who sadly died just 12 days old after being cared for by staff at the unit.

Ric, who runs his own corporate training company, said he wanted to honour the hard working doctors and nurses at the neonatal unit, and the events – previously attended by celebrities including Frank Bruno MBE – have become annual fixtures, raising a total of £150,000 in just three years.

Anna, who had taught Ric during his time at the University, wanted to take part after attending a previous event as a guest and asking whether it would be possible to organise female fights.

She went on to spend eight weeks training with him at Bridgewater Salford Amateur Boxing Club, run by Lee Whitehead – another graduate of the University’s Sports Science programme.

Anna said: “I was very honoured to be part of the event this year, which gave me the opportunity to personally raise money for this fantastic charity.

“I have helped boxers before with their diets for the lead up to a fight, but this time it was me following my own advice.  I thoroughly enjoyed the training, despite it being hard, and the night itself was brilliant and one I will always remember.”

Ric said: “Anna was incredibly fit and healthy and absolutely dedicated to the training. She lives what she teaches and so she’s in very good shape.

“It was great that Anna wanted to get involved in this and we’re all really grateful to her.”

Tameside’s Highways team create their own tribute to NHS staff