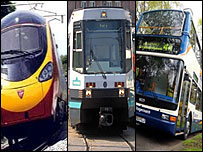 These are sum of the promises being made to Greater Mancunians as long-term framework to improve transport across the city region, creating a cleaner, greener, more prosperous Greater Manchester, through better connections and simpler travel has now been finalised.

Considering all types of travel, from short local trips to Greater Manchester’s global connectivity, the Strategy shapes the future of transport as part of a radical, and ambitious, new approach to planning in support of the region’s long-term needs and aspirations.

Among the proposals to be considered are Improved orbital public transport travel opportunities, the next generation of rapid transit routes (tram-train and bus) and Improved maintenance and resilience of our highways key route network and local roads.

The plan will explore the potential to expand the Trafford Park Metrolink line (currently under construction) to the AJ Bell Stadium and Port Salford.

The plan will look at increasing capacity for rapid transit in Manchester city centre, including exploring the feasibility of tunnels, a transformed Piccadilly hub to integrate HS2, Northern Powerhouse Rail, local rail and Metrolink as well as investment in walking and cycling into and across the regional centre and the implementation of a clean  Air Zone to reduce air pollution.

The publication of the final Strategy follows a public consultation, which received nearly 1,800 responses.

Mayor of Greater Manchester, Tony Lloyd, said: “The Greater Manchester Transport Strategy 2040 is a vital building block in planning for the future of our city region and the needs of travelling customers are at the heart of these plans.

“Having this framework in place allows us to shape and create a successful, resilient city region, ensuring the sustainable success of Greater Manchester for generations to come.

“Finalising our Strategy is only the beginning. We are already working to deliver the first phase of activity outlined in these plans; building the new Metrolink line to Trafford Park and the Trafford Centre; creating new, enhanced interchanges in Ashton-under-Lyne, Bolton, Stockport and Wigan; and making improvements to walking and cycling infrastructure.

“What’s really important is that these plans incorporate the views of individuals, organisations and businesses from across the city region as well as from neighbouring areas, enabling us to create a long-term strategy which works for the whole of Greater Manchester and beyond.

Alongside the Strategy sits a five-year delivery plan, detailing the first stage of implementation from 2016 – 2021. Together these documents make up the Greater Manchester Local Transport Plan.

Progress on delivery will be reported on annually to ensure the policies and measures are working. This will also help to deliver the growth planned for by the Greater Manchester Spatial Framework, which is currently being developed.