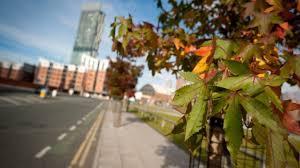 A plastic free region and an emissions free bus fleet are two of the proposals on the table as The Mayor of Greater Manchester, Andy Burnham, together with local leaders hold their Green summit today.

The Mayor wants to bring Greater Manchester’s date for achieving carbon neutrality forward by at least a decade to 2040.

Climate change experts say this move is necessary if Greater Manchester is to meet Paris Agreement targets. The new commitment would be one of the UK and Europe’s most ambitious carbon neutrality targets.

To achieve this, the city-region is exploring radical proposals that include building zero carbon homes, an emissions-free bus fleet, doubling the provision of charging points for electric vehicles, a Greater Manchester energy company, and a plastic-free city-region campaign.

Initial investment in green technologies and policies would bring huge economic benefits and jobs to the region, said Mayor Andy Burnham speaking ahead of the summit.

He said: “A carbon-neutral city-region needn’t be some far-off ambition, the reality is that we can’t afford to wait; climate change is happening now. A green future is there for the taking if we just take that first step to go for it. For Greater Manchester, today is that first big step.

“Greater Manchester has never been afraid to be a pioneer – and today’s Green Summit presents us with a fantastic opportunity to be bold in our ambitions and become a UK and European Leader.

“More local renewable energy is achievable, and is increasingly becoming cheaper and cleaner than carbon fuels. Although initial investment can be expensive, the long-term rewards and savings are huge. What we can’t afford are the long-term costs of carrying on as we are.

“Retrofitting our homes to make them more energy-efficient would help reduce carbon emissions and fuel bills; carrying out the work could also bring tens of thousands of jobs to the city-region within this sector alone.

“All businesses need to become green businesses, and the quicker we make this change, the bigger our economic and environmental advantage. And by bringing together this burgeoning green industry with a robust work and skills programme through our schools and universities, we can develop a homegrown skilled workforce that’s ready and able to meet the demands of today, and tomorrow.

“The sooner we start making these changes and take that leap, the sooner we can start to see the rewards – cheaper running costs for our transport fleets, a healthier population, and a thriving green economy on our doorstep. Greater Manchester is going to lead the way for others as we move towards a cleaner, greener future.”

The current target is for Greater Manchester to reduce emissions by 80-90% by 2050 (from 1990), in line with the UK’s target, but local leaders, including the Mayor, want to bring that target closer by at least a decade to mitigate climate change and capitalise on the economic opportunities presented by the renewable energy industry.