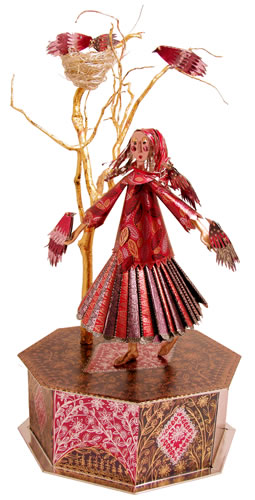 A new touring exhibition curated by the Crafts Council comes to Gallery Oldham from July 8 to September 2.

A Curious Turn features 30 pieces of extraordinary automata, and is the first major review of its kind since 1992.

Automata are moving mechanical sculptures that are brought magically to life by sequences of cogs, cams, and levers. They have delighted and bewitched people for centuries. Visitors will be able to turn, push and crank to see many of the pieces in action, while newly commissioned films will show other pieces in motion.

A Curious Turn presents automata by leading makers of the last 40 years that range from the humorous to the macabre and from the playful to the satirical. Works on show take a look at key automata makers such as Rowland Emett, famous for creating the elaborate inventions of Caractacus Potts in the film Chitty Chitty Bang Bang (1968).

Pieces and makers on show include;

· Sam Smith, widely seen as the grandfather of contemporary automata, has influenced generations of automata makers. His beautifully painted colourful ‘toys’ at first glance look playful and harmless, but on closer inspection they explore the darker side of human life.

· Paul Spooner, an automata maker who has been perfecting his making process for over 30 years. As well as being a skilled carver, Spooner is an accomplished illustrator and some of his drawings from the Crafts Council Collection will be revealed in the exhibition for the first time.

· Melanie Tomlinson, whose automata are printed with beautifully intricate drawings of folklore and fairy tales, which are brought to life when the sculptures move. Tomlinson works hard to keep secret the mechanisms that make her characters come to life, making her decorative work even more intriguing.

A Curious Turn also looks at the central role that Cabaret Mechanical Theatre and its founder, Sue Jackson, have played in the revival of automata from the 1970s onwards.

Recognising the potential popularity of moving sculptures, Jackson actively encouraged a group of makers in Falmouth, including Peter Markey, Paul Spooner and Ron Fuller to make automata to sell in her local craft shop, Cabaret. She often actively guided their creative direction, looking for wit and entertainment in the automata that she collected.

Councillor Barbara Brownridge, Cabinet Member for Neighbourhoods and Co-operatives, said: “This is a fascinating exhibition and something a little bit different. I’m delighted that these unique objects will be on display at the Gallery and the interactive element will allow visitors to get a real hands on experience.”

Sarah Alexander, Director, Cabaret Mechanical Theatre said: “The appeal of automata is now truly international, and this timely exhibition gives us a chance to show the very best of British creativity in this field. It is also a fitting tribute to my mother, Sue Jackson, who sadly died suddenly earlier this year. She left a wonderful legacy.”

Booking ahead: 2019 chapter for Rochdale Literature and Ideas Festival