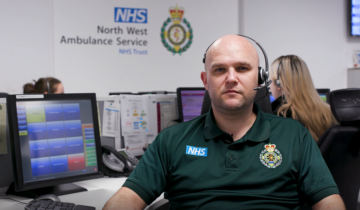 In 2019 North West Ambulance Service received more than one million 999 calls, but shockingly over a third of these were not for emergency situations.

37% of 999 calls were for patients who could potentially have been treated at an urgent care centre or by a GP, pharmacist or at home with a few days’ rest.

Over the last decade the number of calls handled by 999 operators has increased year-on-year.

Now, for the festive season, which is typically the busiest time of the year for the service, the North West Ambulance Service has created a video highlighting some of the weird, wonderful and ridiculous calls they’ve received over the past twelve months.

The video stars one of the service’s emergency medical dispatchers, who handles 999 calls, and highlights some of the more bizarre calls the service has received in a bid to remind people when to call the service.

Talking about the video, Ged Blezard, Director of Operations at NWAS, said: “Our emergency call handlers are the heart of the ambulance service and their advice and guidance over the phone can often be the difference between life and death.

“We have created this video, which includes some of the most ridiculous calls made to our emergency number, to make people think about how these types of calls can affect the service, and the situations in which they should dial 999.

“We understand that people panic or need help for situations that are concerning to them, but reporting a broken kettle, or out of reach toilet paper, which are both real calls featured in the video, can stop us from saving the life of a person in a real emergency.

“Winter is always the busiest time of year for the ambulance service with 999 calls increasing as the weather turns colder and the party season gets underway. More than ever, we need the public to use common sense so we can help people who need us most.”

This year alone the ambulance service in the region has received calls relating to a stubbed toe, an adult with head lice and a patient with a blister, as well as several animal related calls, including a dog that had been attacked and a cat that had been run over.

Talking about receiving these calls, Graham Lawrenson, Emergency Medical Dispatcher at NWAS said: “I was on the phone to a woman who had hit a male whilst driving her car, leaving him unconscious. I was worried for both of them but kept calm, as I needed to give her instructions to help save his life. But I soon discovered that ‘he’ was in fact a rabbit.

“The contrast between how this call started and how it ended shows that some people still don’t understand when to use the 999 emergency service. Unfortunately, we can’t send NHS ambulances to animals.

“My plea to people is only to call the ambulance service when someone is seriously ill or injured and you think they could die, otherwise your call could be blocking the line for a real emergency.”