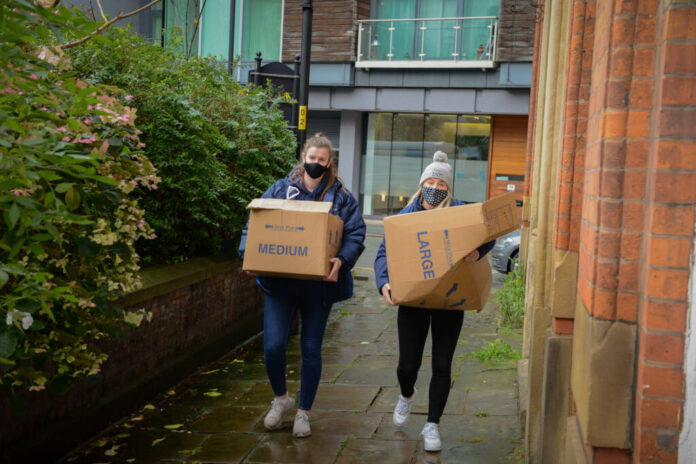 Sale Sharks have joined forces with the Sharks Community Trust and Centrepoint, to help raise money over the Christmas period to support the valuable work the homeless charity does with young people in Manchester.

The campaign was initiated by Sharks and England player, Marland Yarde, after a chance encounter with a homeless young man at a cashpoint in Manchester city centre.

After buying the young man some food from the shop next to the cashpoint, he explained to Marland why he had found himself homeless and how Centrepoint as a charity were supporting him.

Marland decided that he wanted to find out more about Centrepoint and the plight of homelessness in Manchester and so contacted the charity to see how both he and Sale Sharks could help.

Marland initially arranged for Sharks teammates and club staff to donate coats, clothing and toiletries to Centrepoint, which he personally delivered along with teammate, Tumy Onasanya, women’s team stars Georgie Perris-Redding and Vicky Irwin, and the club’s co-owner Michelle Orange.

And the delivery signaled the start of the club’s Christmas campaign with Centrepoint which is aimed at supporting a city-wide drive to combat homelessness amongst young people by asking players and fans alike to donate to the charity.

Sale Sharks are now asking the rest of the Sharks family to get involved by making a donation to the Sharks and Centrepoint Christmas campaign to help fund food, clothes and shelter for the many young people who will be spending Christmas Day on the streets in Manchester.

Hannah Winter, Regional Fundraising Manager for Centrepoint in Manchester, said: “Christmas is a difficult time for young people living on the streets or in hostel accommodation.

“Covid-19 has had a devastating impact on young people and we have seen increasing numbers of people turning to us.

“Young people are bearing the brunt of job losses and breakdowns in family relationships.  Previously those young people would have been able to turn to their friends for temporary accommodation but as a result of lockdown restrictions many have had no option but to sleep on the streets. This is especially concerning as more than 23,000 young people are expected to face homelessness this Christmas.

“We are hoping that with the support of Sale Sharks and their networks and fan base, we can help bring some Christmas cheer to those that have so far faced a difficult year.”

Sharks co-owner Michelle Orange said: This campaign began with a chance meeting on the street with one of our players, but now it is something we want the entire Sharks family to get behind and support.

“Centrepoint does incredible work but they need donations to try and help as many of Manchester’s homeless young people as possible.

“The Sharks fans have always given us their support on the pitch, now we’re asking for their support off it. With their help, we can make a real difference this Christmas.”

LGBT Advisor to the Mayor of Greater Manchester calls for people to support important...