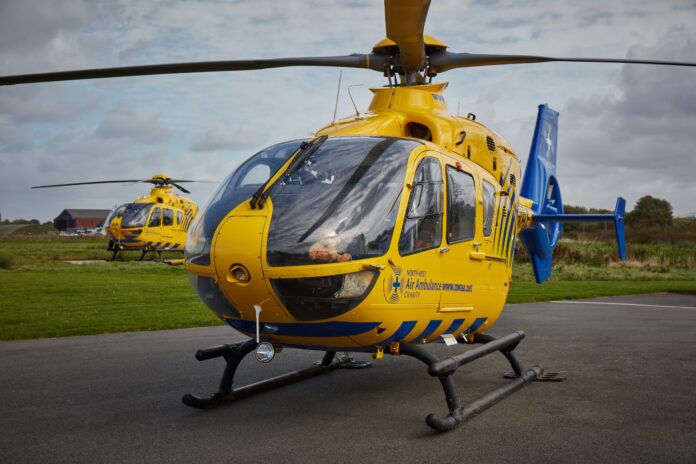 The North West Air Ambulance Charity (NWAA) is launching an appeal for enthusiastic new volunteers to jump onboard, as it begins to safely reopen some of its 14 charity stores following closure as a result of Covid-19, including its Dean Row Court shop, which opened on Tuesday 7th July.

As the charity opens its Wilmslow store doors again, as well as its eBay warehouse in Speke, it is seeking volunteers to play an important role in saving lives across the North West.

Throughout the Covid-19 crisis, the charity has kept in touch with its volunteering team to monitor wellbeing and ensure no one feels isolated or left behind.

One of the charity’s volunteers, Jeanette Dixon, from Manchester, is excited to get back to helping the charity as an events volunteer in the coming months. She joined, along with her husband, after needing the crew’s care in 2012:

“Back in 2012 I had an accident in which I almost fell of my horse, but instead of letting go I hung on and managed to pull myself back up. In the midst of it, I broke my right femur, earning me the fame of being the person who broke a leg without falling off a horse! As a child I’d had complications with polio, and my affected left was the one I broke, so I needed medical attention to make sure I didn’t lose further mobility.

“The air ambulance crew arrived on scene quickly and treated me with such care before airlifting me to Wythenshawe Hospital. I was nervous about being in the helicopter, but they were so understanding and kept me calm. Once I had recovered, I was looking for a way to give back to the charity and decided to help as a volunteer. Although I couldn’t commit to regular volunteering in a store, myself and my husband Barrie have helped at plenty of events, and it’s really rewarding to give back to the people who were there for me when I needed them.  Volunteering with NWAA is a great way help a truly lifesaving charity. It’s also extremely flexible, so however much time you have, you can find something that works for you!”

Operating seven days a week, 365 days a year, last year NWAA attended 2,466 missions each year, delivering emergency pre-hospital care to the most critically ill and injured patients across the North West. It does not receive Government funding, instead relying on public support and dedicated volunteers, who play an important role in helping the charity raise £9.5m a year to remain operational.

Helen Doward, NWAA’s head of volunteering,praised the volunteering team: “The last few months have been difficult for many charities, with Covid-19 forcing stores to close and suspending volunteering activity. The resilience our volunteers have shown in lockdown has been amazing though, with most of the team raring to get back to their roles once safe to do so. It’s been heart warming to have volunteers continuing to show our charity and each other a great deal of support, despite not being able to volunteer.

“The charity has carefully planned out the phased reopening of our stores, ensuring social distancing is adhered to and installing clear till barriers to keep our teams and customers safe. With some of our existing volunteers unable to return for the time being, we’re looking for new people to join our Wilmslow store.

“You’ll be supported by a brilliant team and in-house training, and we aim to help people get as much out of volunteering as possible, whether that’s learning new skills or meeting new people. It’s a great way to get involved in your community whilst donating your time to a truly life-saving service.”

The charity has 14 stores across the North West, including Hale.