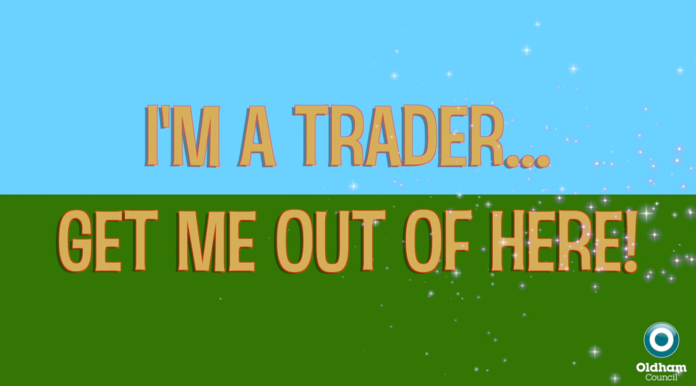 Reckon you’ve got what it takes to attempt those gruesome Bushtucker Trials on ITV’s hit show ‘I’m a Celebrity… Get Me Out of Here!’?

Well, while the likes of Caitlyn Jenner, Ian Wright and Kate Garraway have been putting their ultimate fears to the test in the Australian jungle, traders of Oldham’s Tommyfield Market have been testing their own bravery during their take on the reality TV series – ‘I’m a Trader… Get Me Out of Here!’.

Inspired by the show’s well-liked, yet unappetising eating trials – which this year have already tested the stomachs of Radio 1’s Adele Roberts and Capital FM’s Roman Kemp – ‘I’m a Trader… Get Me Out of Here!’ comprises of five eating trials that four of our local traders courageously attempted.

Now while there was no ‘Piggy Pudding’ (pig’s uterus) or ‘Critter-Bocker Glory’, (dead cockroaches, crickets and mealworms) on the menu for our traders, they did however, taste some of the market’s products which, shall we say, are an acquired taste – with one product having actually featured on a previous real-life Bushtucker Trial.

Mel and Lisa both participated in the debut appearance of ‘I’m a Trader… Get Me Out of Here!’ in 2018, when the duo attempted to eat Lamb’s Liver, Honeycomb Tripe, Ox Tongue, Fish Eyes and Scotch Bonnet Chillies. Lisa came out on top to take the crown, but did she maintain her title?

The first trial, which was published on Oldham Markets’ Facebook page (@OldhamMarkets) at 9am today, shows the contestants attempt to eat one of last year’s favourites – fish eyes – which were provided by local fish mongers, Crossley’s Fish. With plenty of throat retching and heaving on show, it’s enough to make you lose your appetite but it’s also a great watch and not to be missed.

The following four trials will be published from 9am every morning up until Friday 6 December, when the last trial will reveal who will is crowned this year’s winner of ‘I’m a Trader… Get Me Out of Here!’.

Helen Lockwood, Deputy Chief Executive, said: “Our officers and market traders had some real fun taking part in these challenges and it’s been a great opportunity to highlight some of the random products that our traders sell in the market.

“’I’m a Trader… Get Me Out of Here!’ has the real makings of an excellent game to play at Christmas and I really hope it gives our shoppers some ideas for the holiday season as I can see this going down really well with all of the family.

“Why travel thousands of miles to Australia, when you can shop local, support your local traders and buy some really great products that would be perfect in your own version of the Bushtucker Trials?”

Nick, from Jacksons, said: “I thoroughly enjoyed taking part in the trials. It was great to have a laugh with our fellow traders and shoppers in the aisles too, although when you watch the videos, you can probably tell which trial was my least favourite.”

Last year’s winner, Lisa, of Hen House said: “The trials were definitely harder than they were last year. They were a real challenge, but it was great to be a part of it all.”

Mark, from Crossley’s Fish, said: “These kinds of activities are a great advert for the market as they showcase all of the great produce we sell. The contestants gave it their all, especially with the fish eyes from my stall – I couldn’t resist giving them some of the bigger ones.”

’I’m a Trader… Get Me Out of Here!’ is one of a number of projects that Oldham Council has worked on with local traders, to encourage shoppers to love their local market.