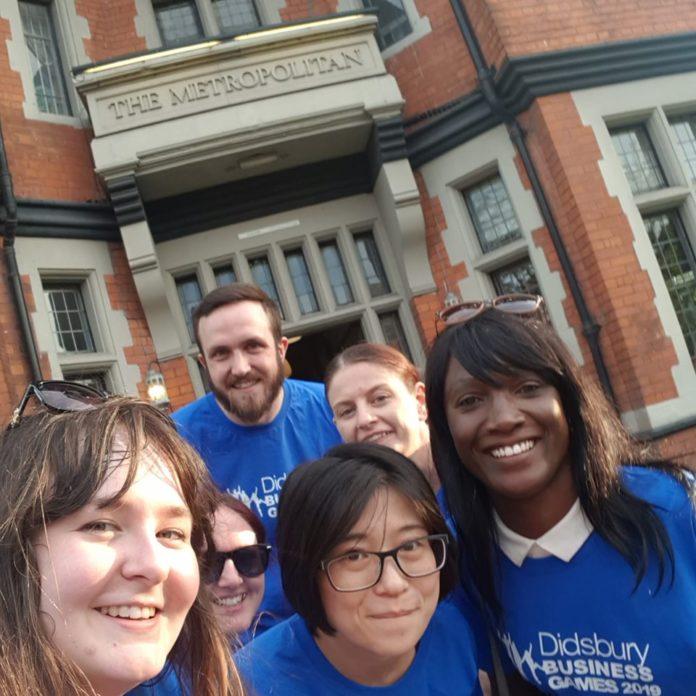 Week 2 of The Didsbury Business Games took a new direction with the first Treasure Hunt of the games across Didsbury.

Starting and finishing at The Grosvenor Casino at Parrswood entertainment centre, this year’s team had to navigate around the area solving clues, anagrams and travel on foot and across the Metrolink to pick up tokens from landmarks and venues across Didsbury.

The teams were mentally and physically challenged but it was certainly not all about speed. This event was all about working as a team, solving each clue and choosing the best route to take before setting off to each new location.

Chris Hayes, from Waterside Hotel and Leisure Club who is one of the organisers and one of the main architects of this event commented, “we wanted to add a new element to the games this year. Apart from having fun and raising money for The Christie it’s also a good opportunity to share with those teams competing what Didsbury has to offer. We have been overwhelmed by the support of local establishments who opened their doors to our teams to collect clues and support our cause.”

To ensure the teams did not follow each other, clues for each competitor were to be collected in a different order but all teams had to collect items from and have their photographs taken in 12 different locations. Using the Metrolink and travelling on foot each team had to use their wits, local knowledge and their smart devices to go from place to place in the fastest possible time.

For the 2nd week in a row, the team from Booth Ainsworth came out on top completing the treasure hunt in 2 hours and 9 minutes, followed closely by Orcale in 2 hours 13 minutes.

Event 2 has meant a few updates to the overall leader board but last year’s winners Booth Ainsworth continue their great start with The Albert Club and Oracle close behind. You can check out the whole picture by visiting http://didsburybusinessgames.co.uk/leaderboard/

The funds raised during the Didsbury Business Games for The Christie this year will be going towards the redevelopment of the Paterson Building.  This project aims to rebuild the old Paterson Building (damaged by fire in 2017) https://www.youtube.com/watch?v=p-xArpbiusA  as a state-of-the-art research centre, partnering with the University of Manchester and Cancer Research UK.

The aim of the 2019 Games is to raise £14,000 through fundraising. Every year the funds raised by teams competing in the Didsbury Business Games make a massive difference to all that goes on at The Christie.

Next week sees the teams taking part in another new event. The Albert Tennis and Bowls Club will be hosting short tennis and target bowls. This event will mark the half way point before the teams take a break before starting up again in June. There will be another 3 weeks of events after this including the sports day challenge, outdoor team activity challenges and the quiz night to round the games off.

If you want to know more about getting involved in the 2020 Didsbury Business Games and follow the progress of all the teams competing this year visit http://didsburybusinessgames.co.uk/

Double amputee dog invites dog lovers of Manchester to join her for the final...

Over 150 people to sleep out in Manchester’s Victoria Baths to help young people...