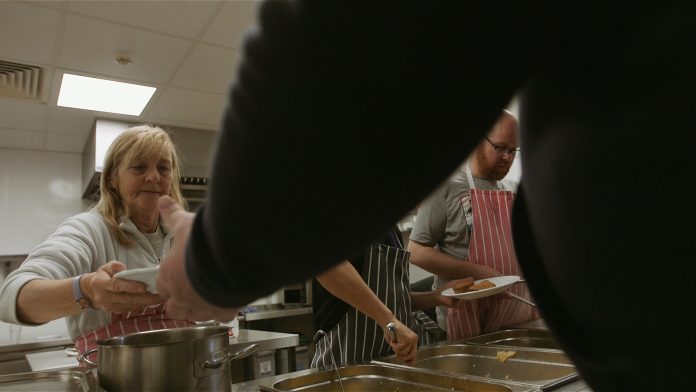 Since 2016, social enterprise Foodinate has brought over 50,000 hot, nourishing meals to people in need in deprived communities in Manchester and across the UK.

Foodinate only celebrated reaching the 10,000 meal mark in January 2018. Caroline Stevenson, founder of the social enterprise and recent winner of Inspirational Woman of the Year at the Enterprise Vision Awards, says about the remarkable rate of growth:

’The problems are becoming impossible to ignore. People can see the hardship in their own towns and cities and want to know what they can do to help’

After witnessing the rise of poverty in and around Manchester where she grew up, Caroline decided to create Foodinate to help alleviate the rise of the problems she could see growing around her.

She said: ‘We live in the 7th richest country in the entire world, and yet so many people are going without. I wanted to create a link between the two sides of the same coin, enabling local businesses, and local people to help those in need in their own community. It’s about making a sustainable, scalable impact on a huge issue but in a really simple way.’

Originating in Manchester and going from strength to strength, the organisation is now making an impact in 12 regions across the UK, including London, Birmingham, and Leeds. Each time a customer in a partner restaurant buys a meal marked with a Foodinate logo, a hot meal is provided to a person seeking help locally.

Caroline said: ‘We are incredibly proud of all of our partners for reaching the 50,000 meal milestone together, and we feel very fortunate to be in a position where we can give back to our local communities.’

Proove Pizza, one of the scheme’s partners, is expanding its restaurant base in Manchester and Sheffield, meaning Foodinate is growing with its backers and vice versa.

The director at Proove Pizza, says: ‘We’re delighted to make such a real and tangible contribution to homeless charities via Foodinate – we have given over 20,000 meals to local people in need in Sheffield and Manchester since the end of last year! To have such a big impact within our local communities is fantastic, as it means we know we are making a real difference.’

Co-owner of George’s Dining Room and Bar in Worsley and ex-Manchester United player, Ryan Giggs, who backed the initiative during its early stages, said: ‘Foodinate has been a success. We really liked the simplicity of the concept from the outset and we are proud to be one of the first restaurants to sign-up to it.’

Since then, he and Gary Neville have signed up their events and catering venture, GG Events & Catering, ensuring every person attending a private event booked at one of their venues results in a meal through Foodinate.

The Alchemist, Foodinate’s first national chain backer with 13 locations and counting, has increased the scheme’s reach to a national scale.

The managing director of The Alchemist commented: ‘The Foodinate initiative has been brilliant for our business, I love the fact that it allows our guests and our teams to engage with their immediate communities and feel good about contributing to a cause that is close to all of our hearts. We look forward to a long-lasting relationship and further supporting the scheme with our upcoming openings in London.’

Restaurants and venues who sign up to the initiative can expect to attract new customers, boost their customer loyalty and even increase their sales.

Cyclist dies in hospital seven days after being hit by a truck in Trafford...