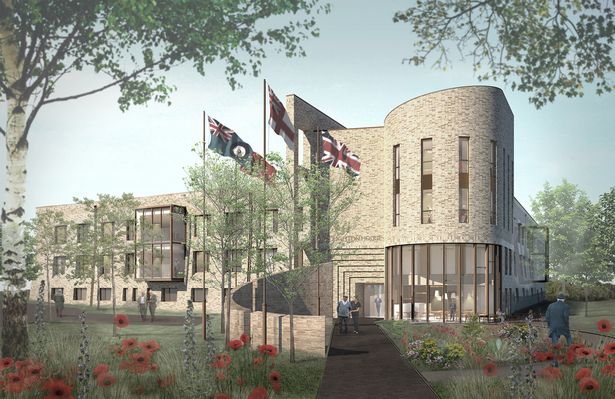 The substantial funding proposal for Broughton House, the UK’s first Veterans Care Village in Salford was put to Greater Manchester Leaders last week and will help the charity make its plans to transform the current facility.

The investment matches a £3 million grant made last year from LIBOR, an initiative that sought to redistribute banking fines to worthy causes.  The Ministry of Defence is involved in the project and supports it wholeheartedly, recognising that twenty percent of the Armed Forces are recruited from the North West and the vast majority return here once they have left service.

Broughton House opened in 1916 following an appeal to the public of Manchester for money to help with returning soldiers. Hospitals were overflowing and new accommodation was needed to help ease the pressure. It is now in the midst of a £13m overhaul to become a care village dedicated to Greater Manchester’s veterans of all ages and conflicts by 2020.

The new care village, which will tend to both physical and psychological wounds, will have a 64-bed registered nursing facility, respite and rehabilitation facilities and 28 independent living apartments alongside a military support hub for veterans living in the community.

The facility will also house the Broughton House museum and will provide gym and meeting amenities for veterans and their support services.

Mayor of Greater Manchester and GMCA lead for finance and investment, Andy Burnham, said: “Broughton House has done an incredible job for more than 100 years serving those who have served us. This extra funding reflects our commitment in Greater Manchester to the Armed Forces Covenant and will play a vital role in giving the right amount of care and attention our veterans need and deserve.

“This investment into the centre would be set up uniquely to help ensure the charity can pay the money back in a sustainable way while providing the best possible care to our veterans.

“I visited Broughton House last year to present a grant from the Mayor’s Homelessness Fund and saw first-hand the work they are doing to support our veterans. They are highlighting how Greater Manchester is leading the way nationwide in how we support our veterans and are setting a new standard for the quality of support that’s provided.

“In their first century of care they supported more than 12,000 people who have left our armed forces. These new facilities will help to ensure this support continues for future generations.”

Minister for Defence People and Veterans, The Rt Hon Tobias Ellwood MP, said: “From the battles of Passchendaele to the campaign in Afghanistan, Broughton House has for over 100 years supported those who have given so much to keep us safe.  This investment, on top of the £3 million the Government provided from LIBOR funding, ensures that this vital facility will support veterans for years to come. It is the Armed Forces Covenant in action.

We’re stepping up our support to veterans across Britain and in the autumn will launch our new Veterans Strategy.”

Chief Executive of Broughton House, Ty Platten, said: “Broughton House has been there for Greater Manchester veterans returning home injured from the battles of Passchendaele and the Somme, from Dunkirk and Normandy, Korea, Northern Ireland, the Falklands, Iraq and Afghanistan.

“Broughton House is a place of great cultural and historical significance to the veteran families of Greater Manchester and this assistance from GMCA will mean that another 100 years of veteran service and support will become a reality.

“No city in the UK will provide care for their veterans as well as we will in Greater Manchester.”

Broughton House has so far raised £8m towards the new facilities, with another £5m still to be found. A £3m loan from GMCA would enable phase one of the project to be built.

The Manchester Evening News has been running a campaign called the ‘Million Pound Salute’, which aims to raise £1 million to help pay for the new facilities. Donations can be made via www.justgiving.com/fundraising/themillionpoundsalute