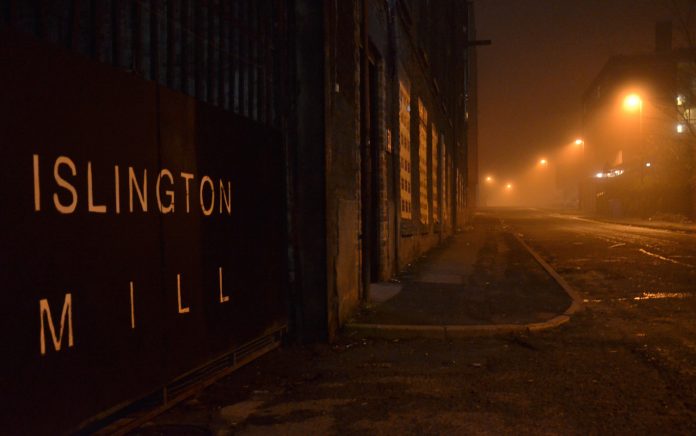 Since 2000 the Grade II listed Islington Mill on James St, Salford has been home to a thriving community of artists and creative businesses. But Islington Mill was originally built for cotton spinning in 1823 by the self-taught Leeds-born architect David Bellhouse (1764–1810).

Bellhouse’s firm was also responsible for the construction of the Manchester Portico Library, of which Bellhouse was also a founding member, and the original Manchester Town Hall on King Street, designed by Francis Goodwin and later demolished.

A year after the original construction of Islington Mill there was a partial structural collapse of the building. During rebuilding, various new structures were added to the original model that had consisted of a single row of cast-iron columns. Further extensions were subsequently added over the years, including a second mill, stables around the courtyard and an external engine house.

By the early 1900s the Mill was being used for textile doubling rather than spinning and by the 1960’s was home to several local business including a shop selling school uniforms to the public.

The pilot project will see an artist exchange between the two cities with University of Salford graduate, Larry Walker – Tonks spending time in Geneva meeting artists and arts professionals later this year.