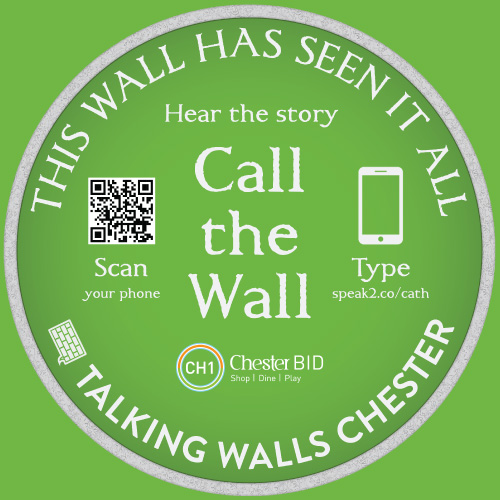 Historic buildings across the Roman city of Chester have been given their own voices thanks to a “world first” arts project.

Celebrities including BBC Breakfast news presenter Louise Minchin and former MP and TV presenter Gyles Brandreth have lent their voices to the ‘Talking Walls of Chester’ project, which brings the city’s ancient buildings to life when smartphone users scan a code to receive a phone call from a wall.

Twenty-six walls across the city are now in full voice and sharing stories from their past as part of the pioneering heritage project commissioned by CH1ChesterBID – Chester’s Business Improvement District (BID) – and delivered by Sing London. The list features a medieval tower on Chester’s city walls, Chester Cathedral, Chester Zoo, shops and cafes across the city centre and Storyhouse – Chester’s brand new £37m cultural centre.

Stories that can be heard include a wine bar built in the very place that was once the gateway to Deva Victrix, Chester’s former Roman fortress; a family-run Italian restaurant with an ancient recipe on its walls from one of the oldest cookery books in Britain; an independent coffee shop which housed one of the few families to survive the 1647 outbreak of bubonic plague in Chester and a furniture store with an 18th century love note etched into its windows.

“Talking Walls brings history alive in a new way,” said BBC presenter Louise Minchin, who has voiced King Charles Tower on Chester’s city walls. “Chester is my home city and when I heard about this project I really wanted to be involved. I’m looking forward to discovering all kinds of things as the walls reveal their secrets.”

“It’s often said that walls have ears but through Talking Walls of Chester we’ve given them mouths as well,” said Gyles Brandreth, who voices Booth Mansion on Watergate Street – one of several independent stores in the city. “The stories that they tell are colourful ones and I really hope that people enjoy hearing them.”

Other walls on the citywide route have been voiced by local personalities, including shop managers, bar tenders, the local town crier and a Roman soldier tour guide.

Using a specially designed citywide map – available online or at a range of city centre locations – passers-by simply scan a code or type in a link from any of the heritage-style plaques on walls throughout the city centre to hear a different story.

Carl Critchlow, BID Manager at CH1ChesterBID, which commissioned the project, said: “We know that Chester’s history and heritage is one of the key reasons people come to visit the city so we wanted to create a modern way for visitors – as well as local residents – to experience it.

“There are so many fascinating stories we’ve unearthed throughout the city centre and Talking Walls of Chester brings all of them to life through a combination of history, humour and online technology. It’s a free activity people can enjoy when they’re in Chester city centre and we hope it encourages people of all ages to come and explore the amazing shops, museums and landmarks we have in our beautiful city.”

“Working with Chester’s historic archives, cultural institutions and city centre shops, we’ve created a series of short monologues that tell this historic city’s story from a fly on the wall perspective,” added Colette Hillier, director of art production company Sing London. “Talking Walls of Chester invites listeners to jump into history and hear what happened right there, in the very place they’re standing.

“We’ve delivered projects like this in cities like Chicago where we’ve given voices to statues but it’s never been done with walls so this arts project really is a world first. And what better city to do it in than Chester – the best preserved walled city in England!”

One-in-four drivers still in the dark about new standard grade of petrol being introduced...