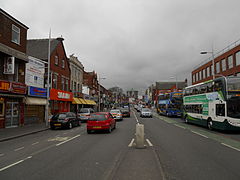 Police are appealing for witnesses after a man was threatened with a gun in Rusholme last night.

The 21-year-old was threatened with a gun whilst taking a short cut by the junction on Grandale Street and Fleeson Street in Rusholme just after ten thirty.

The man with the gun was white and was wearing dark clothing, a dark hooded top and spoke with a local accent.The man threatened to shoot the victim but the victim managed to run away unharmed.

Detective Inspector Mark Davis from GMP’s City of Manchester team said: “Luckily there were no injuries, but being threatened with a gun must have been terrifying for the victim, who was just walking down the street to meet his girlfriend.

“We have launched an investigation and there will be an increased police presence on the streets in the area whilst we conduct our enquiries.

“Guns are not welcome on our streets and any threats will be taken extremely seriously.

“I am appealing for anyone who witnessed the incident or saw anyone acting suspiciously to get in touch as soon as possible. This was a busy area, so also I’m hoping that something could have been caught in dash-cam footage.”