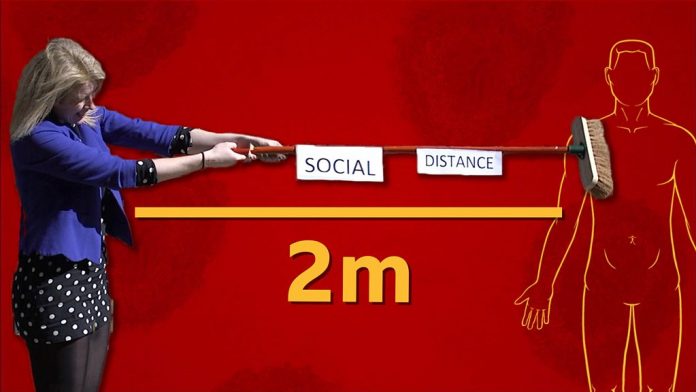 The  UK’s two metre social distancing rule could be relaxed according to medical director of Public Health England Yvonne Doyle, speaking at a science and technology committee hearing this morning

During questioning when asked about the two metre social distancing rule, Prof Doyle says the WHO recommendation is for two metres at 15 minutes.

However The UK’s position is “precautionary” that it is two metres full stop.

Prof Doyle added that she knows other countries use less but until we know more, two metres is important.

Asked by committee member Greg Clark on international practice and that WHO recommends one metre, as well as other individual countries. We are an outlier, at an extreme end, he added.

Prof Doyle replied that it was a learning experience and she thinks it will be the subject of continued investigation.

The important thing is that indoors it would be a precautionary measure. She says it is right to review and learn more. The UK is collaborating with others about the duration that the virus lasts on products and surfaces.

We know we need to learn more about this, and it is likely the risk to the population is less outdoors, which is why people are encouraged to take more exercise, she says.

Prof Doyle said that Public Health England  are “fully aware” of the economic impact the two metre rule has.