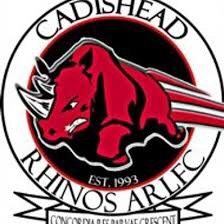 Salford City Council has secured £150,000 of funding from Sport England to build a new base for Cadishead Rhinos Rugby League Club.
Cadishead Rhinos use the changing rooms and play matches and train on the two pitches next to the former Fit City Cadishead, which closed to the public in 2012.

But the building is in very poor condition with structural problems and does not have enough changing, shower and toilet space to meet league requirements and the current and future needs of the club.
Now thanks to the funding boost, a fit-for-purpose modern facility can be built to keep the club thriving for future generations.

Councillor David Lancaster, Lead Member for Environment and Community Safety at Salford City Council, said: “This funding announcement is fantastic news for the club and the community.

“The new facilities and flexible changing rooms will also make it possible to establish female only teams and get more young people interested in local rugby league.

“Nearly 12,000 people used the facility in the past 12 months and we expect nearly 42,000 people to visit in the next three years now the future is secure.”

Paul Elliott, Club Secretary of Cadishead Rhinos, said: “The award is a dream come true for the club and will give us and the local community in general a massive boast! I would like to publicly thank everyone involved in the partnership and look forward to seeing the new building in its full glory!”

The success of the application in what was a highly competitive funding scheme is the result of a strong and committed partnership between the council and Salford Community Leisure, Urban Vision, Hamilton Davies Trust (who are contributing £250k in match funding to the project), the Rugby Football League Facilities Trust and Cadishead Rhinos, who worked closely together to develop the masterplan for the building and secure the funding that will enable the new purpose-built facility to become a new reality.

The council is among 148 local projects to secure a share or £9million National Lottery funding from Sport England’s Inspired Facilities fund.

Greater Manchester to be given control over NHS spending in groundbreaking deal.