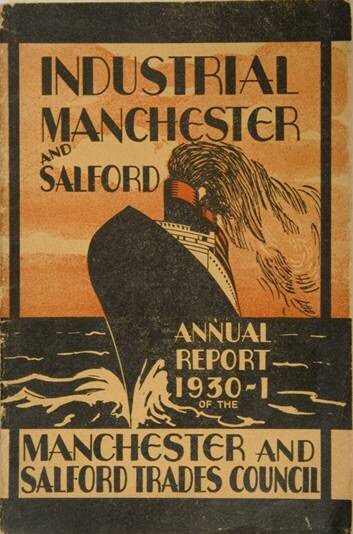 In the mid 19th century the development of steam engines to replace streams as a source of industrial power had led to Manchester and Salford’s flat landscape becoming densely packed with factories, warehouses and offices. In the factories the employers were handicapped by few safety or hygiene regulations while the “hands”, some of whom were children, were subjected to rules such as a ban on singing which could result in fines being deducted from their meagre wages.

The working day went from six in the morning to eight at night with half hour breaks at eight and four and an hour’s break at twelve. Unsurprisingly mortality rates were high and Manchester Hospital dealt with the highest rate of accidents in Europe.

The employers had all the power since factory work was relatively unskilled and workers, as individuals, were easily replaced. The story of the Manchester and Salford Trades Council however is the story of how pooled power, which some workers in skilled trades such as lithographers, mule spinners and bookbinders had gained through “combining”, developed over time into a network of solidarity, pushing for better pay and working conditions.

For 150 years the Trades Council has fought, not only for socialism and trade union rights, but also against injustices such as poverty, discrimination and unemployment – and, as two separate institutions since 1975, it still carries on the struggle.

The exhibition runs until Friday 26 August and is open Wednesdays to Fridays 1-5pm and the first Saturday in June and July 10am-4pm.

Footage released of fight outside the Printworks as 58 year old still in a...

New bridge to built over the Irwell at Radcliffe