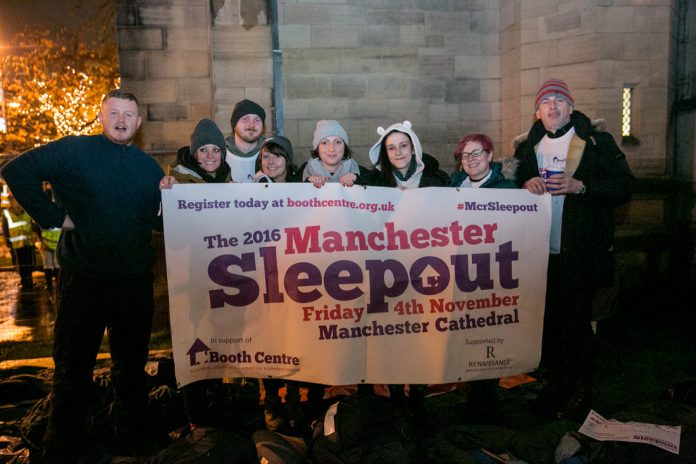 Hundreds are set to sleep out in support of homeless people tonight as the Booth Centre hosts its annual Manchester Sleepout.

A record number of people have registered to take part in the event which is taking place at the city’s Cathedral.

The Manchester Sleepout is designed to bring the community together, raising vital funds and increasing awareness of how the Booth Centre works to bring about positive long-term change to the lives of those who are homeless, or at risk of homelessness, in the city.

Now in its seventh year, it will challenge participants to experience what it is like to sleep on the streets, highlighting some of the hardships that the homeless suffer on a daily basis and raising much-needed funds for the charity’s life-changing services.

The Booth Centre offers a variety of services to the homeless community of Manchester and those at risk of homelessness. The charity aims to bring about positive change by providing advice on finding accommodation, education and training as well as helping to secure employment. The centre also offers free meals and support in tackling health and addiction issues, alongside creative activities to boost confidence and self-esteem.

Last year The Manchester Sleepout raised £60,000 for the local charity and attracted over 250 attendee. This year, the fundraising target has been increased to £65,000 and the charity hopes to sign up over 300 people from across the North-West.

Amanda Croome, CEO of The Booth Centre said: “The current homeless situation in Manchester is astounding. The Manchester Sleepout offers just a glimpse of what it is like to be on the streets but is extremely powerful in raising awareness of the issue and uniting the community.

“Support for the event has grown year on year and it’s heart-warming to see the Manchester community pull together and get involved in raising money to tackle an issue that is so prevalent in the city. We’re expecting this year’s Sleepout to be the biggest yet.”