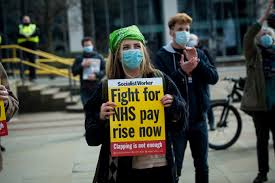 A 61 year old organiser of a protest in the centre of Manchester against the proposed 1 per cent pay rise for nurses has been handed a £10,000 fine for breaking Covid regulations.

Supt Hemingway said: “With the positive step of schools reopening tomorrow, it is vital that people continue to follow government legislation on social distancing and avoid gathering illegally in large numbers.

“Regardless of one’s sympathies for a protest’s cause, we would ask the public to maintain social distancing and follow legislation to prevent a rise in infections and provide the best possible chance of a further easing of restrictions in the weeks to come.”

Residents of Collyhurst consulted on updated plans for 270 new homes incl. 130 for...