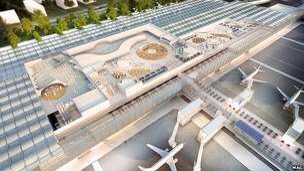 Manchester Airport has announced a 10-year investment programme which will see it spending over £1 billion on improving its facilities for the millions of passengers who visit every year.

The improvements will see new state-of-the art facilities for airlines and passengers including the expansion and reconfiguring of Terminal 2, to become the airport’s primary terminal building and the Improvement of Terminal 3 to cater for increased demand and an expanding flight schedule

The plans will see the introduction of new and enlarged airside transfer facilities, including the direct linkage between Terminals 2 and 3 and a  US pre-clearance facility, allowing passengers to clear immigration, customs, and agricultural inspection by U.S. Customs and Border Protection (CBP) before boarding their flight

It promises the Introduction of the latest technology in a new, enlarged security hall that will screen more passengers, quicker and a host of new customer friendly enhancements, including self-service check-in facilities and around 50 food and beverage and retail outlets

There will also be new stands and piers, offering better departure gate facilities.

Commenting on the ‘Manchester Airport Transformation Programme’, Charlie Cornish, Chief Executive of M.A.G, said: “Manchester Airport is thriving as a national asset, forming a key component of the UK’s aviation infrastructure at a time when airport capacity in the country is at a premium.

“The region in which the airport operates and serves has seen a pace of change in recent years almost unmatched by any other in the United Kingdom and we are proud of the role that we have played in driving economic growth, both across the North and the UK as a whole.

“Manchester Airport has responded well to the considerable changes in the aviation industry over the last 20 years and we have invested heavily to meet the needs of our airline customers, passengers and local communities.

“Over the next ten years, the airport will continue to develop as a global gateway for the UK, directly to and from the North, and these enhancements will enable us to further adapt, modernise and transform the customer service experience we are able to offer.”

The announcement was welcomed by the Chancellor who said

“Today’s announcement of £1 billion of private sector investment in Manchester Airport is a massive vote of confidence in the North of England and in our plan to build a Northern Powerhouse.”

“The investment, which will completely transform Manchester Airport and double its capacity, will help ensure that it continues to compete with global airports across the world.

“It will play a key role in this one nation government’s plan to rebalance the UK economy and boost productivity‎ and is fantastic news for working people across the North.”

Plans submitted to begin the rebuilding of Wythenshawe Hall