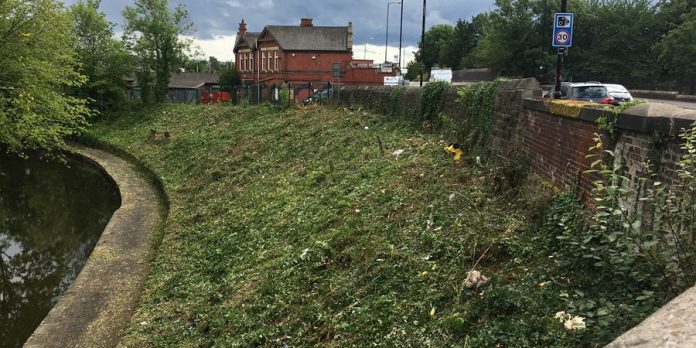 Work has begun on access to the Ashton Canal in Audenshaw

Thanks to £724k funding from Transport for Greater Manchester through the Department for Transport’s Cycle City ambition grant, the project is expected to last 18 weeks.

The ramp, from Guide Lane down to the towpath that runs alongside the canal, will create a new and safe access point to the waterside that is suitable for walkers, cyclists, boaters, wheelchairs and prams, and the associated signage will improve the link between the canal, the railway station local shops and Ashton town centre.

Tim Brownrigg, senior project manager at the Trust, said: “We want to encourage local people to enjoy the canal as much as possible, as we know that being by water can boost health and wellbeing, so we’re delighted that this project is underway.

“Installing ramped access will make a big difference to boaters and people who live nearby, allowing them to get on to the towpath easily and safely.”

Councillor Dizidra Noor, TfGM Committee’s Cycling and Walking Champion, said: “Travelling by bike or on foot are easy and convenient ways of getting around and are great for the family budget.

“The new ramp and improvements along the Ashton Canal will better connect local neighbourhoods and communities, meaning more people will find it easier than ever to travel to employment, education and leisure opportunities.”

The towpath will be closed between Bridge 24 on Hanover Street to Bridge 27 on Pottinger Street throughout the works with a diversion in place.

Investment in the ramp is part of continuing investment to improve cycling infrastructure in Greater Manchester through the Department for Transport’s Cycle City Ambition Grant. In 2015, resurfacing of the Ashton Canal towpath was completed thanks to £1.2m of funding, and other enhancements such as solar lighting, signage and dog waste bins have been delivered thanks to the Local Sustainable Transport Fund.