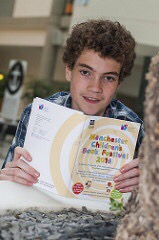 To kick offManchester’sChildren’s Bookfestival, Poet Laureate Carol Ann Duffy announced the two lucky winners of the cross-generation Poetry Together competition to combat loneliness in communities.
The competition run by the Manchester Metropoltain University alongside partners, the Co-operative Group and the British Red Cross, was launched in November. Children and young people were invited to enter the contest by pairing up with a parent, grandparent, aunt, uncle, carer, sibling or friend and writing an original poem.

The winning pair were Carole Ann Smith and Joshua Huw Smith from Swansea who wrote a poem entitled Ellis Evans of Trawsfynydd. Each received £250 as well as the Poetry Together trophy. On winning, Carole Ann Smith said: “I’m quite overwhelmed and really quite honoured. I brought my grandson with me because I wanted him to meet the Poet Laureate but winning was such a nice surprise.” Joshua added: “It’s great – I’ve never won anything before.”

Carol Ann Duffy said: “Poetry Together attracted hundreds of submissions from across the globe and my fellow judges Gillian Clarke, Martin Kratz and I have been thrilled by the quality and variety of poems submitted, and captivated learning about the collaborations that created them.”

Other shortlisted entrants were:

Ute Carson and Kaius Carson-Powers from Austen, Texas (My Omi)

Sian Williams and Samina from Levenshulme, Manchester (We Lived in the Wind)

All shortlisted entrants had their poems professionally designed as postcards and were invited to attend the celebration event, hosted by Festival Directors James Draper and Kaye Tew. Special guests included the Lord Mayor of Manchester and Consort, students from Plymouth Grove Primary School and the brand new Manchester Children’s Book Festival’s Pug mascot.

Richard Pennycook, Chief Executive of The Co-operative Group, said: “The competition is a wonderful way in which to connect people across different generations. Loneliness is one of our biggest social issues, but gets little public attention.”

British Red Cross Chief Executive, Mike Adamson, said: “Congratulations to Carole and Joshua for their winning entry. At British Red Cross we know how important it can be for people at risk of loneliness to connect with friends and family. We therefore created Poetry Together as a symbol of this – to encourage communication and creativity across the generations. Ellis Evans of Trawsfynydd will provide an inspiration to everyone at British Red Cross as we continue our work with the Co-op to highlight and tackle loneliness and social isolation in communities across the UK.”