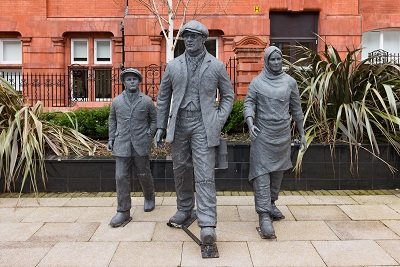 An official unveiling of a statue designed to commemorate Wigan Borough’s mining history is one of several events taking place this weekend.

Wigan town centre will also host the annual Diggers Festival and a heritage event to mark the anniversary of the Battle of Britain on Saturday.

The mining statue – which depicts a miner, pit brow lass and a child – has been in place next to Wigan Town Hall since last year.

It is the culmination of a project spearheaded by the Wigan Heritage and Mining Monument (Whamm) charity with support from Wigan Council.

Leader of Wigan Council, Councillor David Molyneux, said: “Our borough is very proud of our mining heritage and the statue is a fantastic addition to our town centre.

“The official unveiling was delayed last year because of the pandemic, but it is certainly worth the wait. It’s a proud moment and I would like to thank everyone who has contributed to this project.”

Councillor Sheila Ramsdale, chairperson of Whamm, said: “Most people would be aware of the borough’s mining history, it was first documented as far back as the 1300s.

“The statue commemorates the centuries of heritage, the people who suffered and also the incredibly important contribution made by the districts of Wigan Borough to the industrial revolution.”

The unveiling of the mining statue will take place between 11am and 11.30am on Saturday, September 11. The location is between Wigan Life Centre South building and the town hall.

Wigan town centre will also play host to the annual Diggers Festival on Saturday, marking the life and works of Gerrard Winstanley.

The event, featuring live music and performances, will take place on Believe Square between 11am and 9.30pm.

A heritage event to mark the anniversary of the Battle of Britain will take place on Market Place in Wigan town centre.

Featuring a display of military and vintage vehicles, the free family event will run from 11am to 4pm also on Saturday, September 11.

National-Tories lose control of Wandsworth and Westminster Councils to Labour

Hidden unemployment could be adding up to 2 million extra people onto the dole...