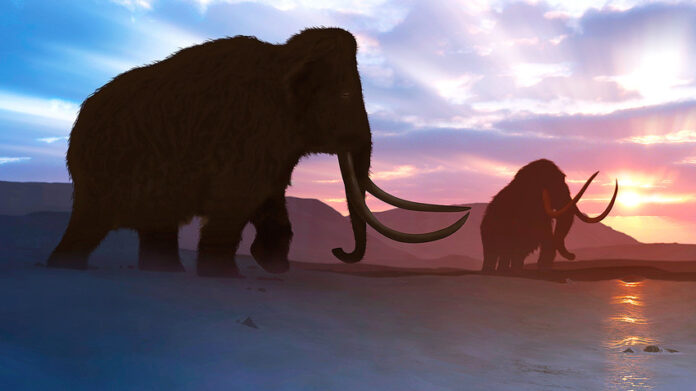 Woolly mammoths roamed the earth for millions of years and vanished for good only 4,000 years ago.

The hairy cousins of today’s elephants lived alongside early humans and figured prominently in their lives: beyond being food, their skeletons were used to build shelters, harpoons were carved from their giant tusks, artwork featuring them is daubed on cave walls, and 30,000 years ago, the oldest known musical instrument, a flute, was made out of a mammoth bone.

The 10-year research project, published in Nature , was led by Professor Eske Willerslev of University of Cambridge and University of Copenhagen. The research team included Professor Mary Edwards from the University of Southampton, who is an expert on the changes in vegetation cover in the North.

The team used a new technique called DNA shotgun sequencing to analyse environmental plant and animal remains – including urine, faeces and skin cells – taken from soil samples painstakingly collected over a period of 20 years from sites in the Arctic linked to mammoth remains. (This same technique was used during the pandemic to test the sewage of human populations to detect, track and analyse Covid-19.) The advanced technology means scientists no longer have to rely on rare finds of bones or teeth to gather enough genetic material to recreate a profile of ancient DNA. The DNA of plants and other organisms is also picked up by this technique, allowing the animals and the plants that formed their food to be analysed together.

Dr Yucheng Wang, first author of the paper and a Research Associate at the Department of Zoology, University of Cambridge, was responsible for the “mammoth” task of analysing the vast amounts of genetic data generated by the project and for assessing models that investigated the possible causes of mammoth extinction—including both climate change and human impact.

Woolly mammoths and their relatives weathered multiple Ice Ages, together with other animals such as bison, horses, reindeer and woolly rhinoceroses. Despite the cold, the open, grassy vegetation that grew widely across the North provided a nutritious food supply. But that changed dramatically and quickly as the last ice age declined, the vast ice sheets melted, and the climate became warmer and wetter. The landscape was transformed, and the nutritious food supply that supported these grazing giants disappeared, being replaced by far more unpalatable trees and shrubs. These patterns are clearly seen in the dataset, which spans the arctic region, and they provide strong support for the notion that it was climate, not humans, that finally did for the mammoths.

Mary Edwards, Professor of Physical Geography at the University of Southampton said, ”This work represents a tremendous effort to obtain, sort and understand an ancient DNA dataset by the team — and especially Yucheng. Beyond the use of the cutting-edge shotgun DNA approach, the work brought together experts on human history, plant life and landscape change in the North to analyse and interpret the data.

“While I might not consider the case closed, this dataset strongly supports the position that rapid climate change and related changes in vegetation were prime culprits in the demise of the mammoths.”

Professor Willerslev said: “Scientists have argued for 100 years about why mammoths went extinct. Humans have been blamed because the animals had survived for millions of years without climate change killing them off before, but when they lived alongside humans they didn’t last long and we were accused of hunting them to death.

“We have finally been able to prove was that it was not just the climate changing that was the problem, but the speed of it that was the final nail in the coffin – they were not able to adapt quickly enough when the landscape dramatically transformed and their food became scarce”.