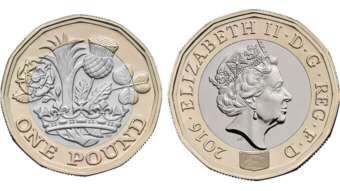 Claimed to be the most secure coin in the world, it  features a new design that shows the English rose, the Welsh leek, the Scottish thistle and the Northern Irish shamrock emerging from one stem within a royal coronet.

The design was created by David Pearce who won a public design competition at the age of 15 and its twelve sides have been based on the old 12-sided threepenny bit, which went out of circulation in 1971.

The Royal Mint is replacing the £1  for the first time in over thirty years because of its vulnerability to sophisticated counterfeiters.

Approximately one in thirty £1 coins in circulation is a counterfeit.
The new coin has a number of features that make it much more difficult to counterfeit. It is 12-sided, its distinctive shape makes it instantly recognisable, even by touch.

It also has an image like a hologram that changes from a ‘£’ symbol to the number ‘1’ when the coin is seen from different angles as well as Micro-lettering, very small lettering on the lower inside rim on both sides of the coin.

One pound on the obverse “heads” side and the year of production on the reverse “tails” side, for example 2016 or 2017.

There is also a hidden high security feature, built into the coin to protect it from counterfeiting in the future.

The old pound coin will stay in circulation until the 15th October 2017.

From this date shops will no longer accept these coins, but you will still be able to take them to your bank.

Urban Splash given go ahead for Irwell Development

Local writers and actors get together for cancer charity