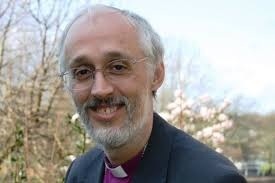 Manchester has a new Bishop it might have escaped your notice.

The Right Reverend David Walker was enthroned as the 12th Bishop of Manchester at a service at Manchester Cathedral on Saturday in a ceremony that saw him knock on the cathedral door three times with his staff to seek entry to the service, where hundreds of clergy and parishioners from across the Diocese of Manchester welcomed him and offered their support and friendship as he took up his new role.

In this age of austerity, the Rev Walker made the journey from St George’s Church, Mossley, where he was baptised 56 years ago. w renewing his baptism vows, and then make a pilgrimage to Manchester Cathedral, symbolising his personal journey of faith.

He walk from Mossley to Ashton, before taking the Metrolink tram to Manchester, stopping off at Droylsden along the way and at the Etihad Stadium, where he was greeted by community representatives.

David Stuart Walker was born in 1957 and was brought up by his single-mother from the age of fourteen Educated at Manchester Grammer School, competing in the International Mathematical Olympiad in 1975 in Cambridge he later studied at Queen’s College, Birmingham.

He was ordained in 1983, beginning his curacy at St Mary Handsworth, then becoming Team Vicar at Maltby. Ordained to the episcopate in 2000, as Bishop of Dudley in the Diocese of Worcester he was elected to the General Synod in 2005.

He has been a fierce critic of the Government’s Welfare Policies and benefit reforms, criticising politicians this year for ‘scapegoating’ migrants. He has experience in this field, having served on the Board of the National Housing Federation from 1996 to 2002 and is a former Chair of South Yorkshire Housing Association and of Safe Haven (a non-profit asylum seeker accommodation service provider).

He was one of 43 Bishops who signed letter arguing children would be ‘disproportionally effected’ by Government cuts. Bishop Walker has said he is ‘hopeful’ for the women bishop legislation. He said: ““I don’t start from a neutral position: I start from the position the House of Bishops has set out. Clearly ‘option one’ has the best chance of delivering for the Church of England; I think we can pastorally meet the needs of those who have theological objections.”