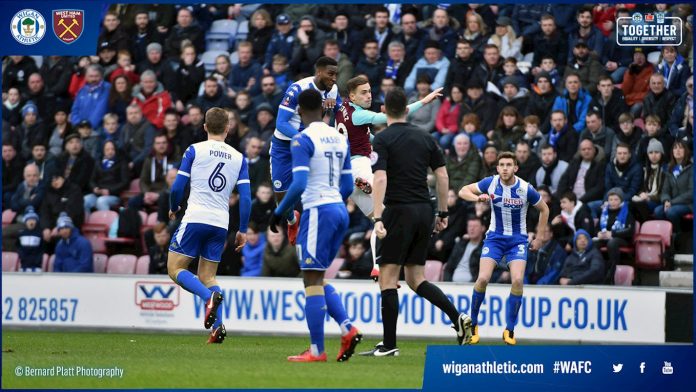 Greater Manchester will have four teams in the Draw for the fifth round of the FA Cup.

With both United and City reaching the last sixteen, the biggest victory was that of Wigan Athletic fired through to the fifth round thanks to two goals from Will Grigg against Premiership West Ham United.

Latics went ahead as early as the seventh minute when Grigg met Nathan Byrne’s excellently weighted cross to head past Joe Hart and into the top corner.

The Hammers were reduced to ten men at the start of the second period when Masuaku was shown a straight red card for an altercation with Nick Powell.

Former Latic Reece Burke was then penalised for handling in the area just after the hour and Grigg made no mistake from the spot to double the advantage.

Rochdale joined them but will have to overcome a replay after a 2-2 draw at Championship side Millwall.

Dale went behind to Jed Wallace’s spot-kick, but fought their way back into the game and grabbed a deserved equaliser just after the half-hour mark.Keith Hill’s side carried the greater threat at the beginning of the second-half and went ahead through Matty Done’s close-range goal, before Ben Thompson rescued a replay for Millwall in the final minute.

Meanwhile in League One, Oldham conceded two goals early against Plymouth which was enough for the visitors to take all three points.

Manager Richie Wellens has vowed to change his style in order to get results following the defeat and the Latics remain in the bottom three having played more games than the teams around them.