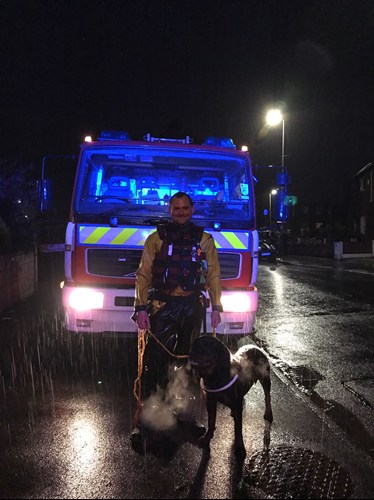 A woman had got into difficulties in a Brook off Lords Street in Cadishead after going into the water to try and rescue her dog who had jumped in.

Three firefighters wearing dry suits entered the water and rescued the woman and her Rottweiler, Bronson.

They were stuck in the brook for approximately 20 minutes and were treated by a fire service trauma technician and the ambulance service at the scene.

The river is approximately four metres wide and chest deep in flood conditions.

Eccles Green Watch Firefighter, Andy Ball, said: “The crew were faced with a woman and a large Rottweiler both clinging to the riverbed and both clearly distressed and unsure what was happening.

“Bronson was confused and acting protectively towards his owner which made things more difficult but our priority was to rescue the lady from the water then calm the dog down and bring him out safely.

“The rescue was a success and Bronson got to chill out with the fire crews afterwards while his owner was checked over by paramedics. Thankfully both were okay.”

Chair of the Greater Manchester Fire and Rescue Service Fire Committee, Councillor David Acton, said: “Dogs always manage to paddle over to a bank and escape from water, it’s very rare that they get swept away. The water is a greater danger to humans, especially at this time of year when the water is cold and flowing strongly.

“We don’t want any more dog owners to get into difficulty around water as winter approaches so we would advise owners to keep dogs on a lead to limit the risk.”