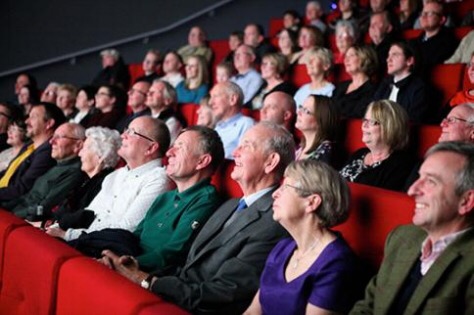 THE families of veterans who served in the Second World War had the opportunity to see their relatives’ poignant messages sent home from abroad on the big screen at a special event at HOME.
As part of the A Message HOME project inspired by the “Calling Blighty” films and organised by the North West Film Archive and Manchester School of Art, more than 230 people attended the screening, including two veteran “film stars” and four generations of some families from veterans and widows to their great grandchildren.

In total, 65 families of veterans have been found and the families of more than 40 were represented at the event.

Calling Blighty is a series of short films made in 1944-46 of individual servicemen and women in the Far East sending personal messages home to their family and friends.These poignant filmed messages were shown to invited audiences in local cinemas, bringing much laughter, and certainly a few tears. A Message HOME is a project to try to find as many families and veterans as possible, to bring them together to show the films again, and to tell their stories.

The project was funded in part by a grant from Film Hub North West Central, part of the BFI’s Film Audience Network, to create a website where people can search the database of over 600 callers, and view the messages. The grant was also a contribution towards the screenings to reconnect the families by showing the films again on the big screen.

Marion Hewitt, Director of the North West Film Archive (part of Library Special Collections), set up the website, found the families, and organised the screening – and more screenings are planned. Professor Steve Hawley, from Manchester School of Art and filmmaker, is creative advisor to the project and made three new short films for the screenings.

Audience feedback described the event as “wonderful”, with one attendee saying: “My two daughters have never met their grandfather so it was particularly magical for them.”

The project is currently being made into a documentary by Oxford Scientific Films for Channel 4, which will be transmitted in early 2016.