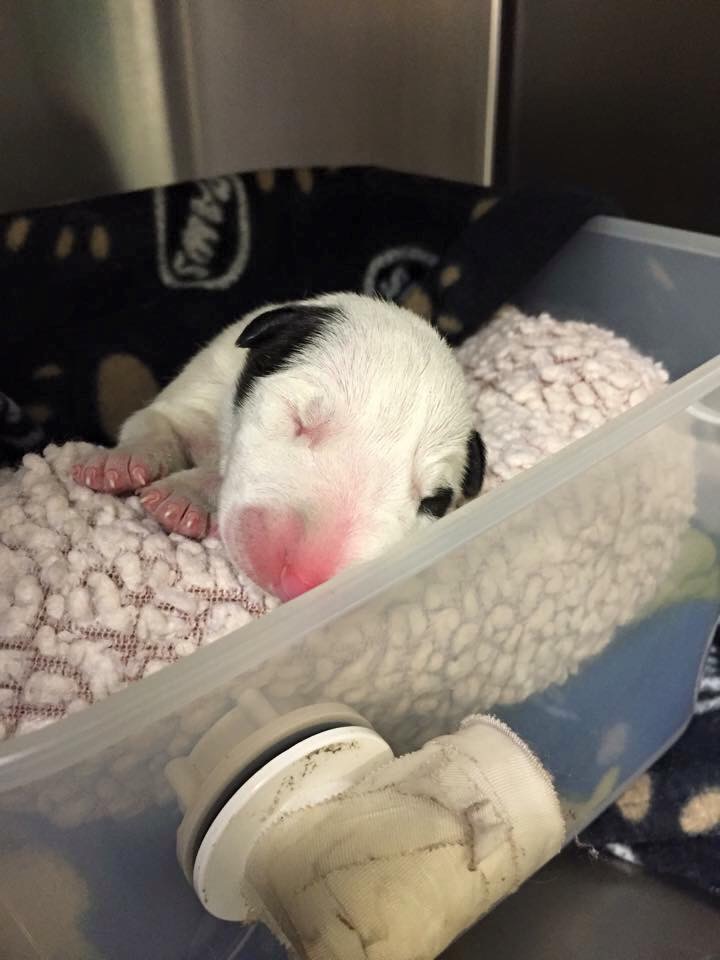 Mum and baby are now doing well but it was touch and go with an unexpected delivery for Salford City Council staff.

Dog wardens Erica Eaton and Will Harris were called to Petmedics, Wardley after a man had abandoned a pregnant English bull terrier in the reception of the company’s branch in Walkden.

The poor pooch was in labour and had been rushed to Petmedics’ Wardley clinic for an emergency caesarean. Sadly two of her three pups didn’t make it.

But mum, now named Hope, and baby Cooper both pulled through and are now recovering with doggy foster parents in Lancashire.

“Petmedics staff at Walkden said a man came in carrying Hope saying he had found her in Parrfold Park. When the staff asked for his details he put the dog on the floor, said he had to go to work and left so they called us. As we couldn’t identify the owner, she immediately became our responsibility,” said Erica.

“We rushed up to Wardley and gave permission for the emergency C section. I named her Hope because she was in distress and quite poorly and I hoped she would pull through.

“A few hours later we rang to see how she was and were told “It’s a boy.” I’d already contacted the Adopt a Bull Terrier rescue charity as they helped us once before with an elderly bull terrier.

“Nicole who runs the charity immediately said she would take them in. Cooper was born six years to the day after she lost her bull terrier who was called Cooper so she was delighted when we suggested naming the pup after her dog.”

Tiny Cooper is now being hand reared with bottle feeds every two hours as Hope recovers from her ordeal. The charity say they will look for a home for both together if possible once both are well enough to be rehomed.