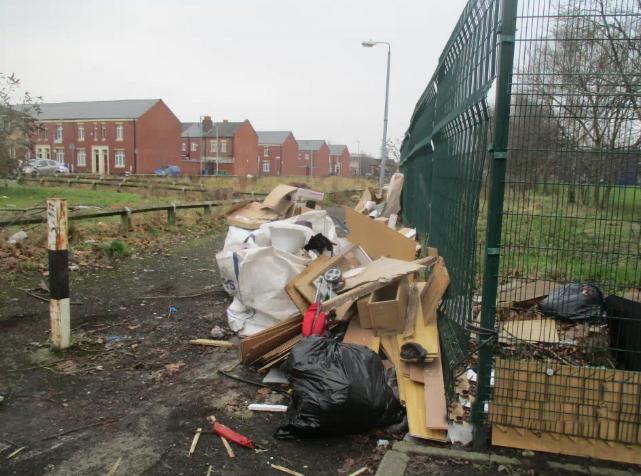 Two men who touted waste disposal services online have been fined for fly-tipping.

John McDonagh and Mohit Sood were caught by council investigators in separate operations and both admitted fly-tipping offences.  Sood was ordered to pay £1,890, while McDonagh’s penalty was £600.

Sood, 27, of Repton Avenue, Oldham, was caught out after 15 bags of waste were found by officers working for Manchester City Council in an alleyway between Friendship Avenue and Hyde Road, Gorton, in November 2016.  The waste was cleared and an investigation launched by the Environmental Crimes team linked the dumped rubbish to an address in Stockport.

When questioned, a resident said they had responded to an advertisement at justmanvan.co.uk – a now discontinued website – and been charged £100 for refuse and two wooden chairs, which were also found dumped, to be taken away.

Officers discovered a similar advertisement on a second website, which is now also offline.  A phone number featured on both websites was traced to Sood, who was interviewed under caution in April 2017.

Sood initially denied involvement in the fly-tipping offence, but subsequently contacted the council to request a second interview, at which, he admitted that he had collected the dumped waste.  Sood also admitted that he didn’t have a licence to transport waste and was prosecuted.

John McDonagh was prosecuted after officers working for the council found a large amount of fly-tipped waste at a site close to Ashbury Meadow Primary School, in the Bradford ward.  Investigators discovered evidence linking the offence to two separate addresses and residents at both properties confirmed they had paid a ‘Jonathan Smyth’ to remove their waste.  ‘Smyth’, who advertised his services on Facebook, had charged fees of £65 and £90.

Environmental Crimes team officers established that ‘Smyth’ was in fact a pseudonym for McDonagh, 25.  Evidence linking the offence to McDonagh was also found within the fly-tipped waste.

At an interview under caution in July 2017, McDonagh admitted that he had been acting as a waste carrier without being licensed to do so.  He claimed that he had given the waste found dumped in Bradford to a third party, but declined to give further details.