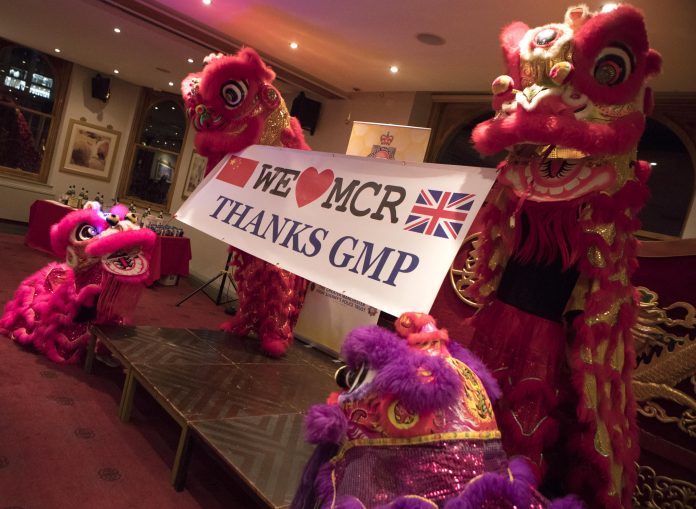 Almost 1,000 police officers and staff have been thanked for their work in the aftermath of the Manchester Arena terror attack last year.

During four nights in February the Chief Constable Ian Hopkins invited officers and staff from Greater Manchester Police, British Transport Police and other forces to recognition events to say thank you. High Sheriff of Greater Manchester, Gerry Yeung was instrumental in ensuring the events could take place after stating that he wanted to show appreciation for the outstanding work.

The High Sheriff and his wife hosted the events at the Yang Sing restaurant in Manchester city centre. The Lord Mayor and Lady Mayoress of Manchester and the Mayor and Deputy Mayor of Greater Manchester attended and took the opportunity to thank everyone for their magnificent efforts.

Chief Constable Ian Hopkins said: “So many people were affected by the attack and our thoughts are with the 22 victims and their families and the hundreds of people suffering physical or psychological trauma. I know people appreciate the trauma that attack had on the emergency services and those who responded.

“GMP received a huge amount of support and an incredible number of positive messages in the days, weeks and months that followed the attack. The events were a way to recognise the actions and use the time to reflect on all those affected.

“I remain convinced that we did our best for the victims, the injured and the people of Manchester on that terrible night and the days that followed.

“I want to thank the High Sheriff, the Chinese community and the sponsors that supported the events.”

“I am grateful to my many friends, business associates and the Chinese community who provided generous sponsorship to allow the events to happen. When I became High Sheriff in April 2017 I wanted to bring the Chinese community closer to the life and society of Greater Manchester and I think we have achieved it.”

The High Sheriff is the Queen’s representative as Head of the Judiciary in the county.

28 shops shut down around Strangeways for trading despite Covid regulations

New data share will make booking a sports session as easy as booking a...