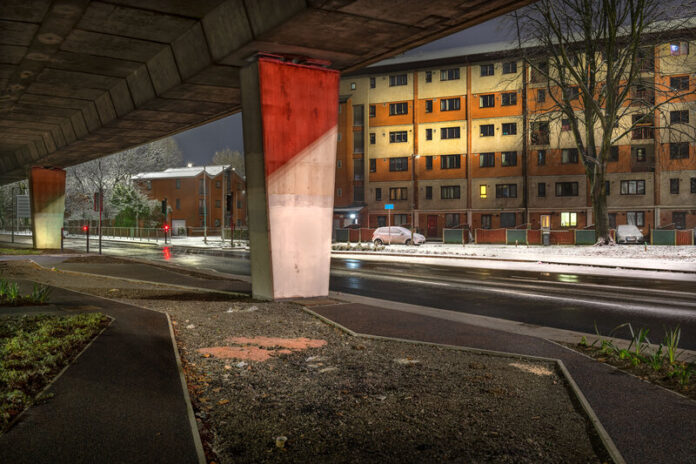 The photographs in this new exhibition are the most recent from Simon Buckley’s ongoing Not Quite Light project, exploring the evolving areas either side of the inner ring road that encircles Manchester city centre and parts of Salford. Along this connecting artery there is great change.

The focus of the work is the route from the now demolished Wellington pub in Salford, to the crumbling Bank of England at the top of Pollard Street in Manchester, following Regent Road over the Mancunian way, and onto Great Ancoats Street. The two names of these places evoke notions of our Imperial past, and the great capital that has always fuelled these two cities.

The Not Quite Light project was conceived in 2015, during a walk in Angel Meadow, when the simple question formed “what would the souls buried beneath this ground think of the city of today?”

Simon Buckley says “Often, people relate my photographs to the paintings of Edward Hopper, which I understand due to the use of light and colour. However, I feel the work is also inspired by the Japanese Prints of the 19th Century, and early 20th century, which embrace the emptiness of the landscape, and fill them with the suggestion of spirits.”

Northern Chamber Orchestra return to the stage in December