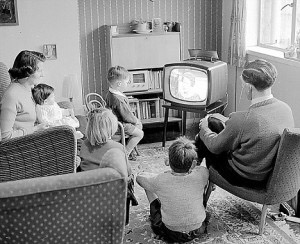 This is the question being debated at this month’s Discuss Event as they explore who actually watches how many of those viewers make the appointment to view when the schedules suggest?

In the age of box sets, netflix, Sky+ and YouTube has television passed through its golden age only to dwindle towards oblivion altogether? Are the only viewers of what we once called “television” now just the elderly?

What might this mean for the BBC licence fee, the advertiser base of ITV, the future of other commercial channels and pay TV networks. And what do the increasing fees for football rights tell us about the power of TV over football , a sport watched all over the world by millions of fans of all ages. Television is also evolving and embracing new forms of media.

This debate features Penny Haslam, an expert chair, dynamic figures from the world of production and a timely conversation in the centre of the city that invented commercial television and is now home to large swathes of the BBC.

Jorga Smith is coming to Manchester on her debut UK tour

WW1 stories and artefacts to share with acclaimed artist Paddy Hartley ahead of residency...