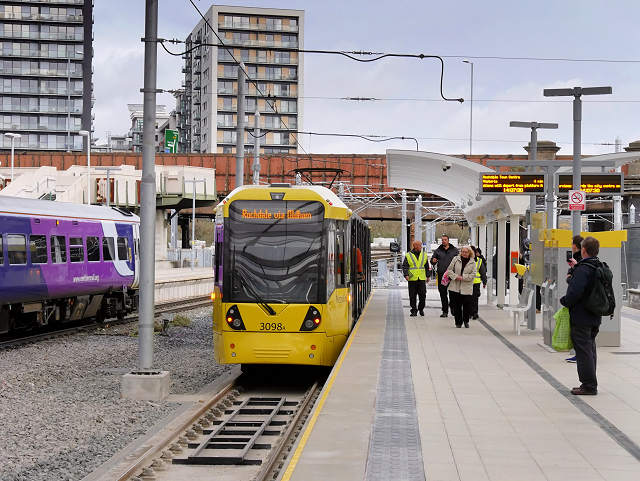 A seventeen year old girl  was racially abused on a tram heading out of Victoria station towards Oldham on Saturday evening,

The girl and her family were travelling on a tram, which had just left Victoria Station towards Oldham when a young male, who was travelling with a group of teens, began confronting the girls’ mother.

The girl tried to intervene but the boy began to racially abuse her. This abuse continued until the tram reached Newton Heath and Moston tram stop where the boy spat at her before exiting the tram with the rest of the group.

The family remained on the tram and called for police assistance.

The offender has been described as black, around 5ft 6ins tall, in his mid-teens with an afro style haircut. He was wearing a black hooded top with a hat underneath the hood.

A hate crime investigation has been launched and enquiries are ongoing.

Chief Inspector Denise Pye, of GMP’s City of Manchester division, said: “This was a horrific and unprovoked attack on a family who were enjoying their Saturday evening together before being subjected to a barrage of racial abuse.

“People should be free to go about their lives without abuse and hate and we are treating this incident incredibly seriously. Eradicating hate crime will always be one of our top priorities as there is absolutely no tolerance of hate in our communities.

“Our detectives are currently supporting the victims at this incredibly distressing time and our investigation is progressing at speed. Forensic enquiries are ongoing and officers are working alongside Metrolink to obtain the best quality CCTV.

“We are working to provide pictures of people we are keen to speak to as part of our enquiries and would appeal directly to the person responsible to get in touch. We would also encourage anyone who he was travelling with at the time to contact police.

“We know a number of people witnessed this attack and are grateful to those who tried to intervene and record footage for us. We would urge these people and anyone else with any information or footage of the incident to get in touch as soon as possible.”

United and kinder but not an equal society after Covid crisis