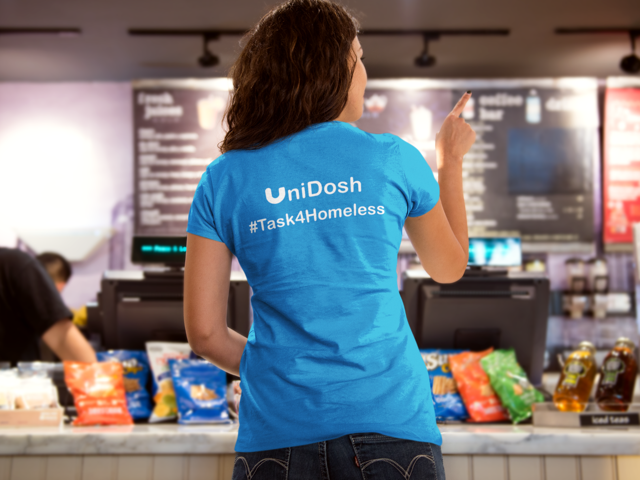 To provide vital food and drink for Manchester’s homeless, award-winning services app UniDosh has set up an initiative called #Task4Homeless.

Manchester has one of the UK’s highest homeless mortality rates, due to a number of causes including starvation.

The #Task4Homeless campaign has been set up by co-founders and longtime school friends of UniDosh, Oliver Jacobs and Joseph Black in conjunction with The Manchester Central Foodbank in an effort to raise awareness and food donations to tackle the homelessness hunger crisis.

Richard, an ex royal military police officer, now homeless in Manchester said: “Without the foodbank, I don’t think I would be here today.”

UniDosh has pledged to make a food donation to The Manchester Central Foodbank for every job/task posted on the UniDosh app throughout 1st-31st May.

For those who haven’t heard of UniDosh, UniDosh is a marketplace platform that aims to connect members of the public and businesses with a student workforce seeking short term job opportunities around their studies. UniDosh currently possess a workforce of 5,000 students, also referred to as UniTaskers.

“This is not a UniDosh project but a City of Manchester project” commented UniDosh Co-Founder, Joseph Black, “The next time you need something done, whether that be cleaning, gardening, office assistance if you task a student to do it on the UniDosh app you’ll contribute towards the #Task4Homeless campaign and feed a homeless person in the city.”

Oliver Jacobs, UniDosh Co-Founder continued: “Over the years we have both played active roles in a number of charity organisations. UniDosh was recently reborn in Manchester, having spent the last year focusing on a product rebranding. We saw this as a good opportunity to do some good for the city of Manchester and run a charitable launch in an effort to gain further awareness for this very much needed cause.”

Greene King and Prince’s Trust looking for youngsters to sign up for Get into...